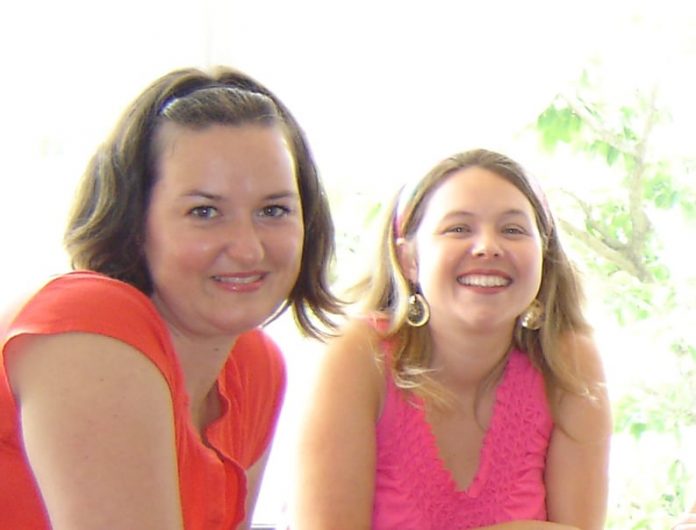 CONTRIBUTED BY JOELLE YAMADA
I kept her from seeing her midwife.  While she was in labor.  Course, it was my midwife too, and we were just chatting about when my overdue baby was ever going to arrive.  When I finally left her office and went down to the waiting room to meet my husband, this pretty woman breezed past me.  I cheerfully said, “Hello!”  And she sort of mumbled something under her breath.
As we walked down to the elevator, I said to my husband, “Wow, she wasn’t very nice.”  Brent responded with, “Joelle, she’s IN LABOR.  She’s been sitting in the waiting room timing her contractions and waiting to see her midwife!”
Oh.
And that was the beginning of a beautiful friendship.

We delivered our babies three days apart and a few weeks later were officially introduced to each other.  We began getting together for play dates.  Found we had much in common including a love of healthy food, the same educational background, a common spiritual outlook, similar parenting goals, and most importantly…  we just clicked.

I find that the more I move, the older I get, and the more I know myself, the faster I can figure out who I really like.  Who has the potential to become a friend and not just an acquaintance.  And I knew we could be real friends.
We even had them over for my husband’s famous tacos, and fantastically, our husbands actually hit it off (a wonderful feature in a friend).  And so the relationship grew.  And grew.  And more and more tacos were eaten.

And now she’s leaving.
The leaving I have learned to deal with.  Well… as well as you can deal with friends leaving.  But what I’m never very satisfied with is the actual goodbye saying.  And more specifically the token given to a good friend that attempts to indicate to them the impact their life has had on you.
Do you give another Kokeshi doll?  A sweet card?  A bulky item that they’ll wish you’d given them before they did their packout?  A final trip to Cocok’s?  A scrapbook of memories you made together?
I’m at a loss.  What I really want to do is buy her the huge Asian cabinet she wants from Oriental Place, but that probably wouldn’t fit in her suitcase.
So what do you give to PCSing friends?  What ways have you expressed yourself to those few precious people you attach yourself to at each new duty station? How do you say goodbye?