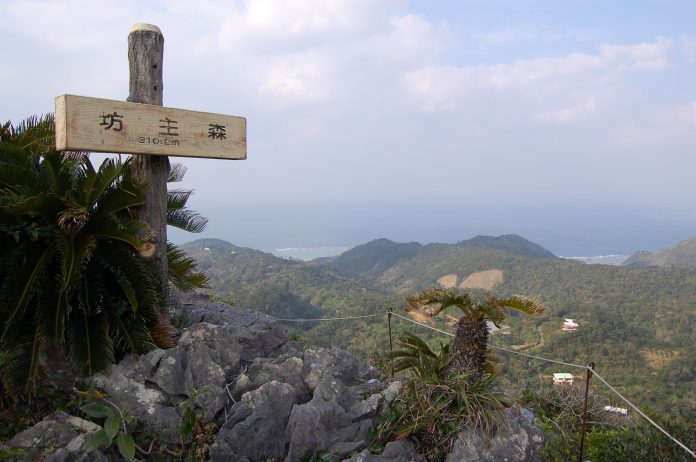 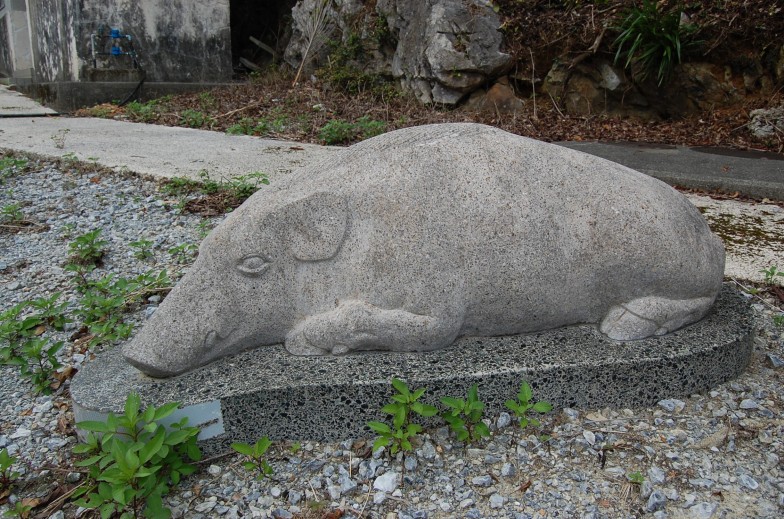 Near the Shah Bay Mutabaru Observatory in Ogimi, there is a small statue of a wild boar lying next to a placard detailing the history of the village’s most important feature: the Yamashishigaki, or “Wild Boar Wall”. Editor’s Note: The author has transcribed the placard, and it is included at the bottom of this article.

The Hiking Trail: Behind and to the right of the Yamashishigaki monument, are a set of rickety faux wooden stairs that serve as one of a handful of entrances and exits to the Yamashishigaki Mutayama Trail. However, this particular entrance and exit, and another located near Igimihakinzo Park, seem to serve as the main access points according to area maps. Let it be noted that the benefit of attempting to hike the trail starting from the Shah Bay Mutabaru Observatory entrance, is that approximately a fourth of the way into the hike, visitors will be rewarded by seeing the Yamashishigaki. In fact, the bulk of what makes up the man-made parts of the wild boar wall is nearest to the Shah Bay entrance, whereas the other entrances rely mostly on the ingenuity of its builders’ resourceful use of the mountain topography’s natural features (primarily rock outcroppings) to serve as barriers against wild boar. 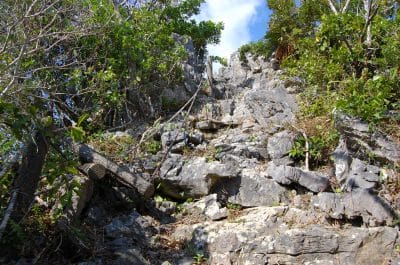 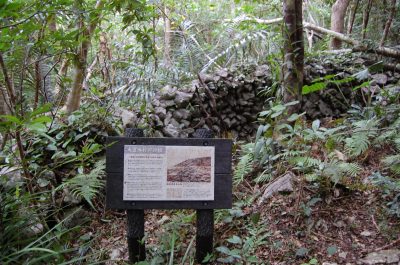 For those expecting to see a wall built with smooth-edged interlocking stones, such as the type commonly seen in the construction of gusuku (castles) on island, the Yamashishigaki is not that type of wall. Though there are definitely parts of the wall that appear to have been better maintained, others have since fallen into disrepair. Even its most polished sections seem almost crudely constructed. Clearly the wall’s architects were more preoccupied with function than  appearance. And yet, despite the inelegance of its construction, it is evident that the wall’s architects were skillful in its building, since a considerable length of it still stands more than four centuries later. 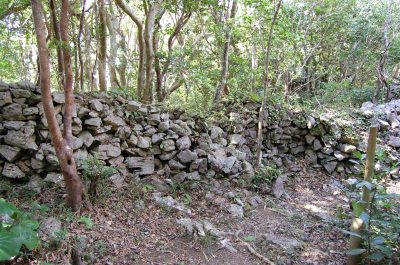 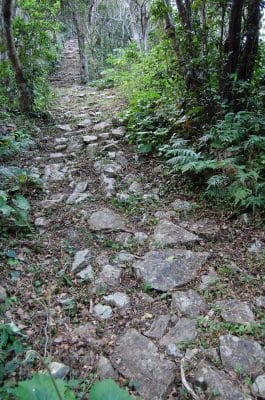 The trail alternates between steep staircases, stone steps, forest undergrowth, and dirt paths. Most of this would be nothing if it were not for cumbersome tree roots, loose rock, and boulders obstructing the way. Even when wearing appropriate footwear (e.g. sneakers or hiking boots) you will stub your toes. You will lose your footing. And you will most likely twist something. You have been warned. 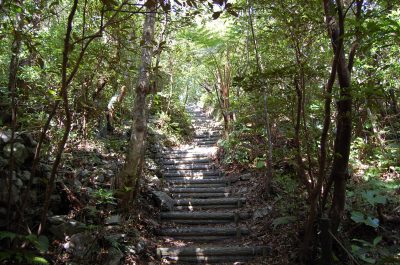 Benches and picnic areas serve as rest stops along the trail, but they are far and few between. However, there are also a few scenic peaks where the path veers off toward views of Motobu, Yagaji-jima, Kouri-jima, Miyagi-shima, and Shioya Bay. The sunsets are absolutely stunning from these vantage points, but visitors must keep in mind how quickly visibility diminishes after the sun has set. We highly advise bringing a flashlight along, just in case things get hairy. 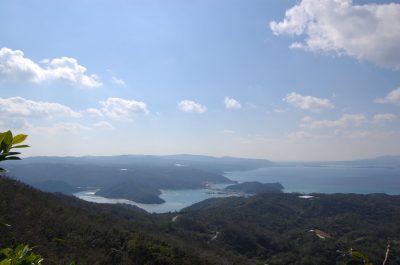 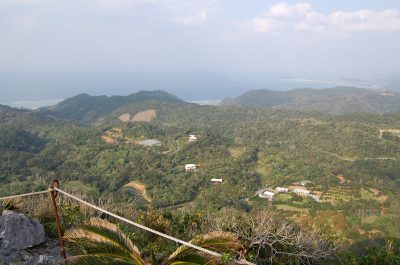 Approximately an hour and a half into the hike (conservatively), the trail will eventually come to a fork where a lone bench and signpost are. The path to the right goes towards Igimihakinzo Park, while the path to the left (marked Uibaruhakinjou) ends near a road (which I will describe later in the Safer Directions portion of this review). It is about an extra hour’s worth of hiking in either direction. And unless you know where either of these exits are, and are resourceful enough to have brought along a friend with an extra vehicle (to enable you to park one car at your anticipated exit, and the other at the entrance), you’ll have to double your walking time back towards the starting point. I highly suggest visitors not attempt to start this hike any later than 1 P.M., in order to ensure you have ample daylight to make it back safely to your vehicle.

Additional notes: December through April are ideal months to attempt this hike, with January being my favorite time to do so. In early January the trail is cleared of overgrowth; wild camellias bloom mid-month; ripened shikuwasa (kugani) is plentiful along the path for eating; and cherry blossom season comes at the end of the month for the entire area. 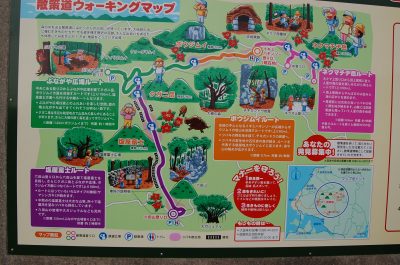 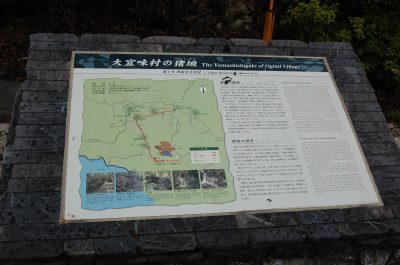 Map Coordinates: 26.671286, 128.126447 (These are only approximate due to Google Earth’s limited mapping of this area. Use in conjunction with the directions posted below.)

Safer Directions: These directions are safest because the Fast Directions outlined above require you to drive up a steep road during the last leg of your trip that is in sore need of repair and shows evidence of recent landslide activity.

Special Note: The placard at the beginning of the trail is posted in Japanese, Korean and English. In English, it reads:

The Yamashishigaki (Wild Boar Wall) was built around the time Noguni Sokan brought sweet potatoes to Okinawa in 1605, and the potatoes became a staple crop. Our ancestors of Ogimi Village built the Yamashishigaki at a total length of 32 km around both the Somayama (the present village) and the crop land (fields) to prevent incursions by Yamashishi (wild boars) and to defend the fields. Particularly the walls were patrolled constantly, with villages determining their areas of responsibility with regard to the repair and maintenance, and collectively performing construction and maintenance.

It is recorded that between 1776 and 1782, the villagers of Shioya, Yakomaeda, Taragawa, Tonokiya, and Nerome, under the instructions of their administrators, undertook a large-scale maintenance construction project on the Yamashishigaki during their agricultural off seasons and during moonlit nights, and where a 2631 step (1.5 km) long, 7 Shaku (2.1 m) high and 4 Shaku (1.2 m) wide Yamashishigaki was said to have been completed by gathering rocks and laying them one on top of the other. (From Kyuyo by Sho Bokuo)

The History of the Yamashishigaki

Our ancestors spent many generations as individuals and as entire communities in maintaining and preserving the Yamashishigaki. Under the laws determining the boundaries of Ogimi Magiri (division of land before Village, Town and City system), the officials of the villages would patrol the wall, and order those in charge of repairs to perform the necessary work on the Yamashishigaki. If they found it was damaged. If they found that it was not repaired by the time of the next patrol, those responsible for the negligence would be ordered to pay two bushels of rice in fines.

Keeping the yamashishi out of the fields was a battle of life and death for the members of the agricultural communities, as the incursions of yamashishi into a field would mean the decimation of not only sweet potato, but all the crops within the community.

The history of our ancestors is engraved within the Yamashishigaki. The Yamashishigaki surrounding the entirety of Ogimi Village is also called the Jyuri-no-Chojyo (named after the Japanese name for the Great Wall of China) It is a symbol of the long history of the people of Ogimi Village, chronicling its building , repairs and maintenance, and is an important cultural asset that speaks to us of the history of our ancestors.