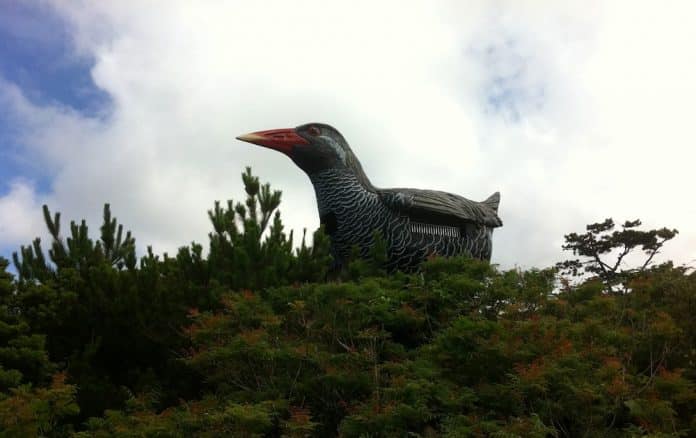 I found this spectacular place while looking at it from Cape Hedo. I was curious to see it close up and wanted to snap some photos of it. The problem was… finding it. My first attempt didn’t go so well. However, persistence paid off, as is often true on Okinawa, and once I discovered how to get there, I was pleased with my findings.

You can actually see and go inside a 3-story kuina bird that is the icon of Kunigami Village.

A fellow Okinawa traveler, Elina, wrote a beautiful post about her encounter with a real Kuina here.  She provides some great info about the elusive bird:

Yanbaru Kuina’s full name is Gallirallus okinawae and it’s known in English as Okinawa rail. It’s in the Rallidae family of birds and its only habitat is the Yanbaru area of Okinawa’s main island. In the Yanbaru it is primarily confined to the area around Mt. Yonaha. And even though large portions of Kunigami-son were officially designated as a national park in 1996, Kuina’s numbers have been on a decline and in 2006 it was put on the Red List as an endangered species. It is mostly flightless and feeds off the ground floor. It also builds nests on the ground and lays 2 to 3 eggs in the spring. Kuina’s numbers have been decreasing for several reasons, including loss of habitat to logging and dam construction, road and golf course building, as well as attacks by mongoose which are foreign to Okinawa and were brought to the island in 1910. Speeding drivers are also responsible for a small number of birds being killed every year but because there are so few birds already—less than a thousand by recent estimates—even a few birds a year killed by drivers is a significant loss to the overall population. So if you come north in search of this tiny black bird with a red beak and red matching legs, please remember to drive slowly on the 70 north of Higashi and on any of the roads in Kunigami that link the west side with the east.

Not only do you get to climb inside a gigantic flightless bird, but you get awesome views of Cape Hedo, Hedo Beach and Dai Sekirinzan. There are two boardwalks below that help you take nice photos as well.

Follow the narrow road downhill to Hedo Beach until you reach another uphill road on the right between the cemetery. Turn right and go uphill away from Hedo Beach. The road narrows, so be very careful as steep and sharp turns make it hard to see oncoming cars. As the roads finally levels out into a forested area, you will see yet another uphill road on the left, turn here. Go uphill on this road until it ends with the parking lot. Go upstairs to reveal the bird’s rear and entrance.