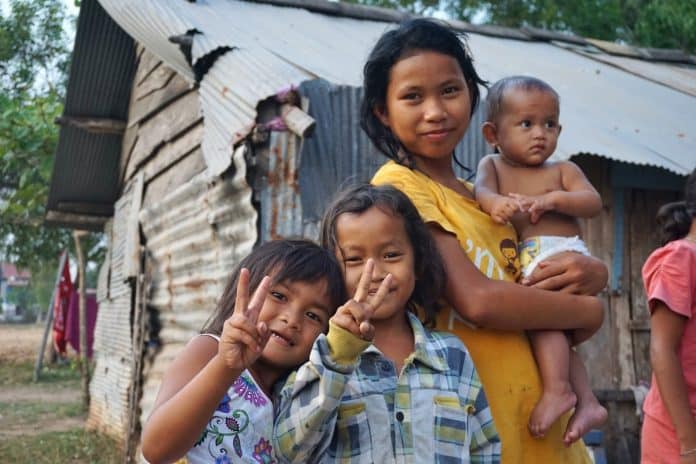 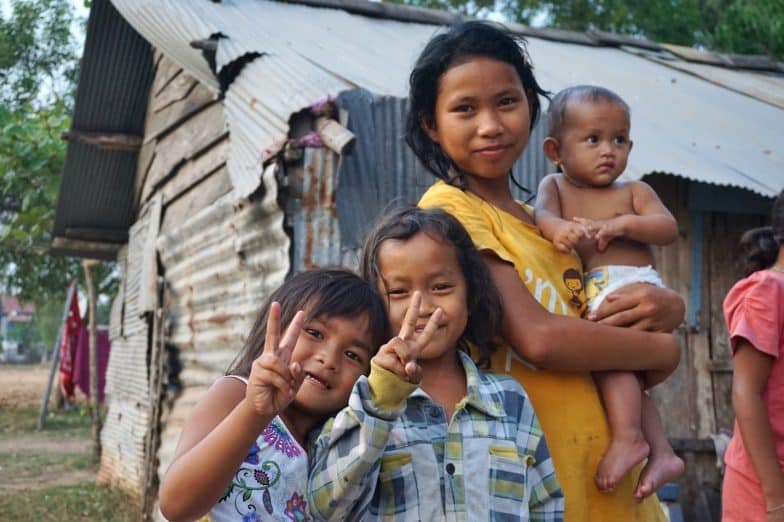 I recently had the opportunity to go on a short-term Christian mission trip with a team from Koza Baptist Church. It was a difficult but important step of faith for me, and I left profoundly humbled by the experience. Let me be clear: I am no expert on poverty alleviation. However, I learned some valuable lessons on this trip. My intent in this article is to share some of my personal experience, and offer recommendations to those of you with a heart for this kind of service.

Our group of four women and seven men spent one week in Siem Reap, Cambodia. We helped build a community bathroom in a small neighborhood, helped paint a church in another (the same church another Koza mission team helped build a year earlier), and conducted daily Bible study activities with roughly 30 local children. 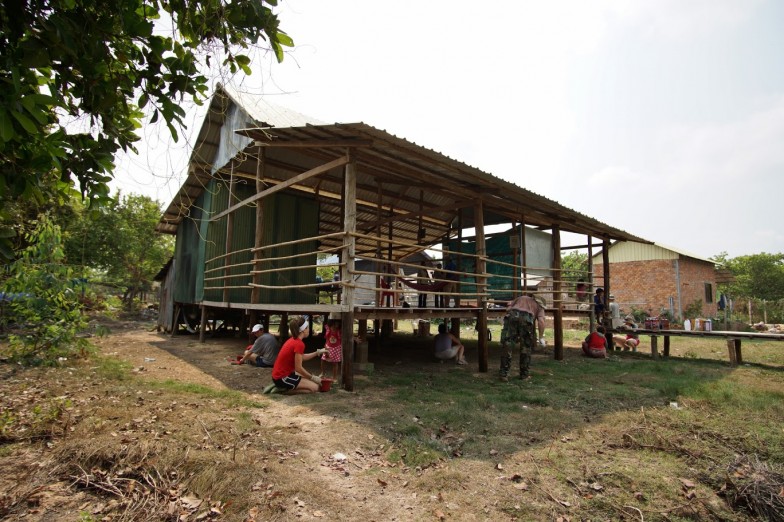 A Cambodian Pastor named Paul was central to our mission, as was missionary Buddy Rathmell, a former youth group leader in Okinawa and founder of stopslavery.org. Paul and Buddy have well-established relationships with the communities in which we worked, making our assistance possible. The widow who ministers to women and children in her church and the people in a neighborhood with no functional toilet were not dependent on being “rescued” by anyone; rather, they dictated their plans to us through Paul and Buddy, and we gladly helped out where we could. 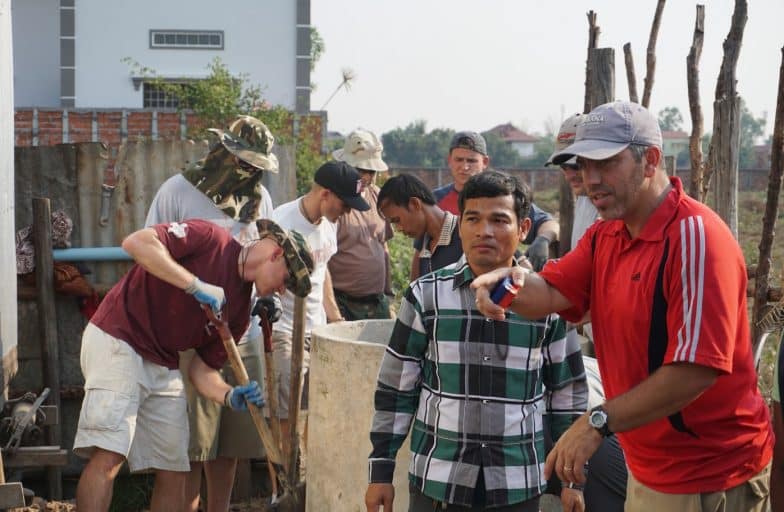 I was worried before the trip that my desire to help could potentially exacerbate feelings of inferiority in these communities. It was hugely important to me that Koza operated from a place of empowering others. The team accomplished this by offering encouragement to individual people and helping them capitalize on what was already working in their neighborhoods. The widow, for example, had worked out an arrangement with some of the parents in her neighborhood. She would conduct Bible studies for their kids on Sunday evenings, so the parents were free to work second jobs to help support their families. We helped her shellac the church to protect it from termite damage, but she was in charge of its use and was proud to share photos with us of the many ways in which she has used the church to unite the neighborhood. 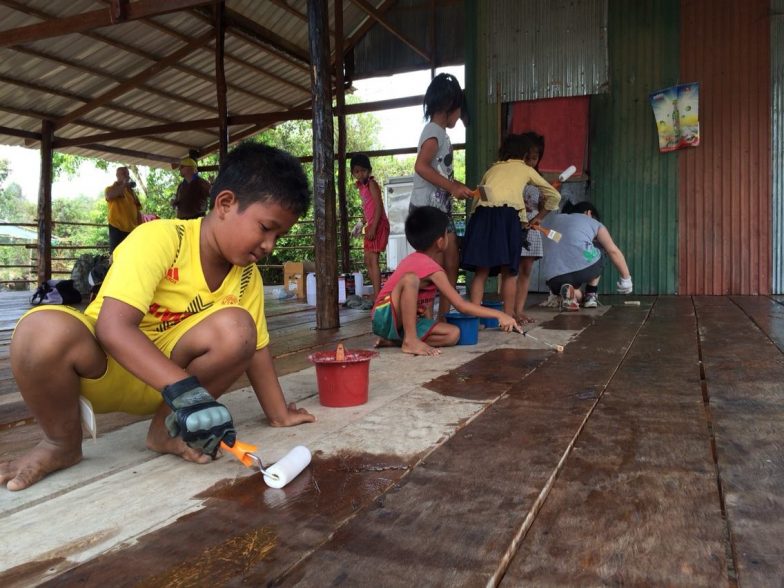 Daily Bible study activities with the kids were the most challenging and rewarding aspect of the trip for me. I am strong in my faith but have always struggled with articulating it to others. Throw in a language barrier and a massive cultural divide, and I was terrified. But the thing about kids, I learned, is that they’re a much more forgiving audience than most adults. At first, I clung to my highlighted scripture passages and hand-written notes. But gradually I realized I didn’t need them. I didn’t need to deliver a carefully worded speech. I just needed to relay the basic teachings of Jesus I’d been hearing about since I was a child. Pastor Paul was a gracious translator; he brought the stories to life with enthusiastic gestures, and his passion for the Gospel gave my confidence a major boost. 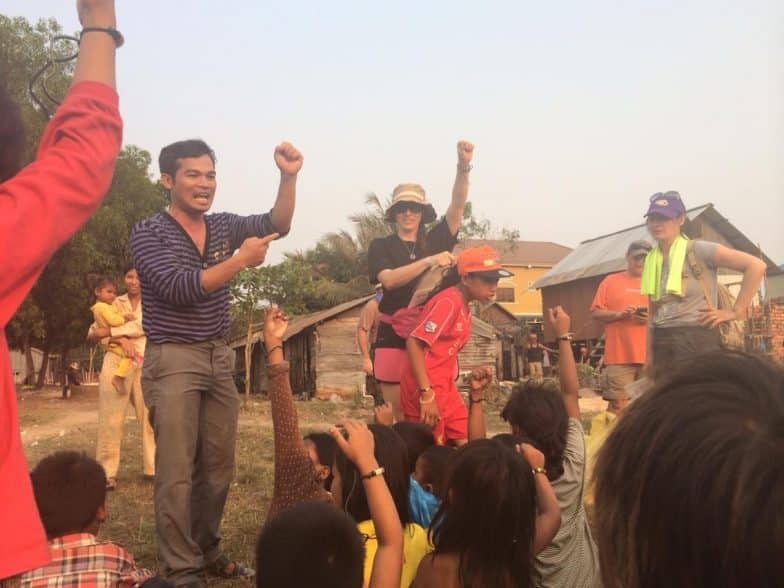 In addition to the building projects and Bible studies, Pastor Paul welcomed us to his home, where he lives with his family and runs a Christian orphanage. Together with his wife, Paul cares for his own three children and five orphans (at the time of this writing.) we had the privilege of visiting with the children, and they joined us twice for dinner.

I was worried, too, about the impact of our visiting the orphanage. I didn’t want to do anything that might harm the children emotionally. Here again, Paul’s permanent relationship with them was the lynchpin marrying our good intentions with his responsibility to the kids. We came simply as friends, to break bread and worship the Lord together. (The kids sang a series of impressive songs Paul had taught them). 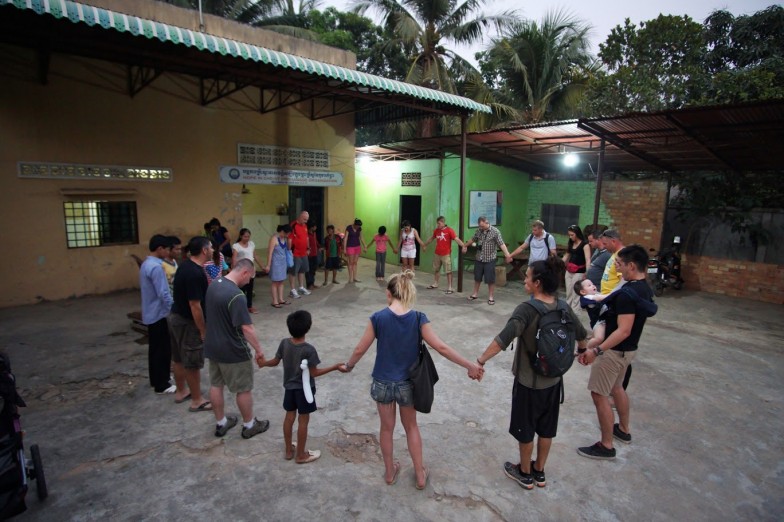 Both at the orphanage and in the communities, I was amazed at the spirit of the children. They were so eager to love freely and learn about Jesus. The time I spent with them made my first world problems seem petty and irrelevant. I thought, “As I struggle to keep my own priorities straight, these kids have no problem putting God first.” What was so simple for them had been an ongoing challenge for me. Every little hand that grabbed mine, every smile that spread across every little face, reminded me to love without conditions or restraint. 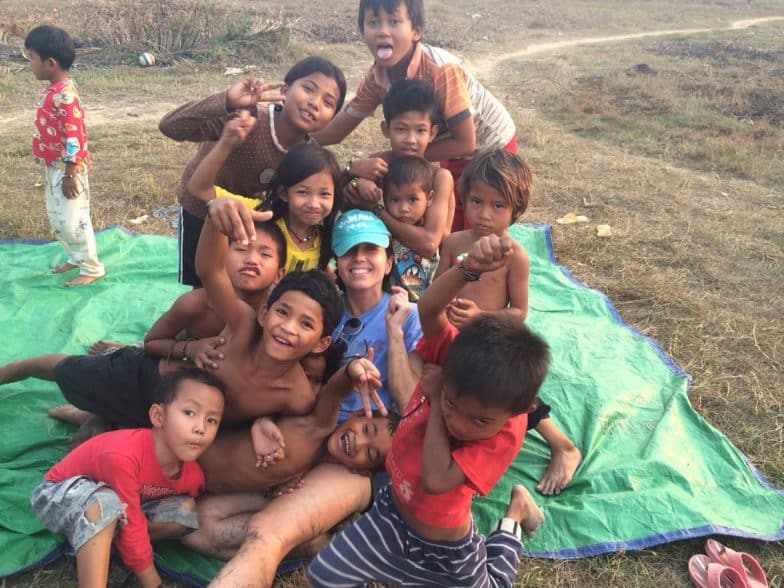 We went to three church services with different groups of kids and families on our last day. I began to cry during one of them, when Buddy preached about The Lord never abandoning us in our times of struggle. It struck me that even though I am not materially poor, I am no better off spiritually than the people I was trying to serve. We are all broken. We all feel intense heartache, I thought, and I need to remember to lean on God just as much as the next person.

I would encourage you to get involved in your own church. Koza Baptist Church organizes one or two mission trips each year, and I’d venture a guess that other churches in Okinawa do as well. If you feel called to go on a mission trip, I would recommend some spiritual preparation.

Do your homework. Koza required each member of our mission team to read When Helping Hurts, a book about how to help alleviate poverty without harming the poor. I feel strongly that it is a must read for Christian mission participants. One of the parts that really stuck with me throughout our trip was: “One of the biggest mistakes that North American churches make is in applying relief in situations in which rehabilitation or development is the appropriate intervention.”

Sure, donating a bag of clothes sounds like a great idea, but how does that affect the local business owner trying to earn his living by selling clothes in that neighborhood? And will that discourage people from working to earn money for clothes? There are many, many ways in which good intentions can have unintended and harmful consequences. This book helped me  understand the differences between relief, rehabilitation, and development.  It challenged me to consider the long term impact of my actions, and to work with the people I encountered, rather than doing things to or for them. 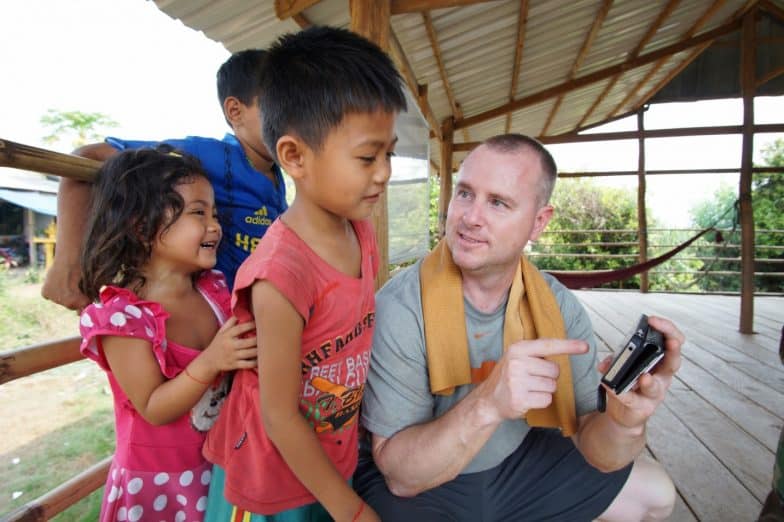 Pray. I initially jumped at the chance to go on a mission trip, only to turn around and doubt my preparedness. I am not a theologian, I am introverted, and I get nervous just praying out loud in front of others. One of the leaders at Koza told me that God does not call the equipped; he equips the called. This became my mantra! I prayed God would show me ways to be useful, to give me the right words, and the courage to overcome my self-doubt. Acknowledging my own brokenness helped me to trust God in leading me. 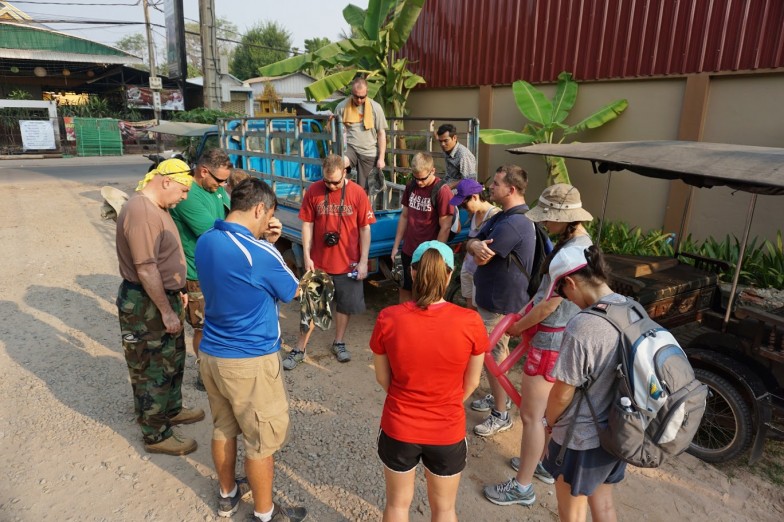 Be humble.  Avoid paternalism. To quote again from the book, “Do not do things for people that they can do for themselves.” I thought about this throughout our trip. While we were painting a church, the women and kids in the neighborhood painted alongside us. When the men in our team were helping build a bathroom, they were working alongside the men living in that neighborhood. The locals had ownership of each project; we were merely assisting. To take that a step further, do not assume you know a better way to accomplish a task than the local people. The men in our group acknowledged that the locals were more experienced in masonry, and they humbly followed the lead of the local men when laying bricks. 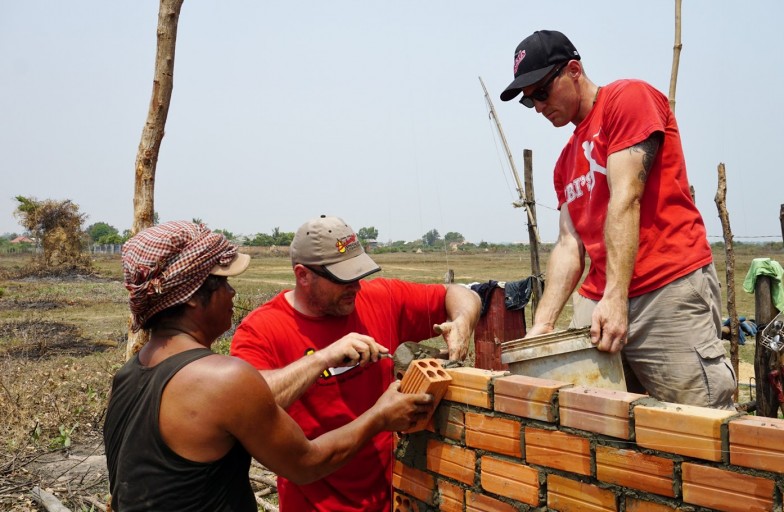 Be flexible. “Participation is not just a means to an end but rather an end in its own right.”  I am very schedule-oriented and it was a challenge for me to let go of my internal deadlines.  I had to be prepared for a particular Bible study with kids but open to the possibility that nothing I had planned would actually happen. I had to be okay with knowing the building projects might not be 100 percent complete before we left. That was okay, because we had such great participation from the communities in which we worked. But it was a big paradigm shift for me.

Trust God. At the risk of repeating myself, I cannot emphasize this enough. I know I am not perfect and I did not do everything right, but I had to let go of my need to control every situation. In Cambodia it was so clear how NOT in control I was. It was a powerful reminder that I need to trust God in my life every day. If I helped encourage a few people by praising their strengths, and nudged a few hearts an inch or two closer to Christ, I am happy to have played that small role in their lives. 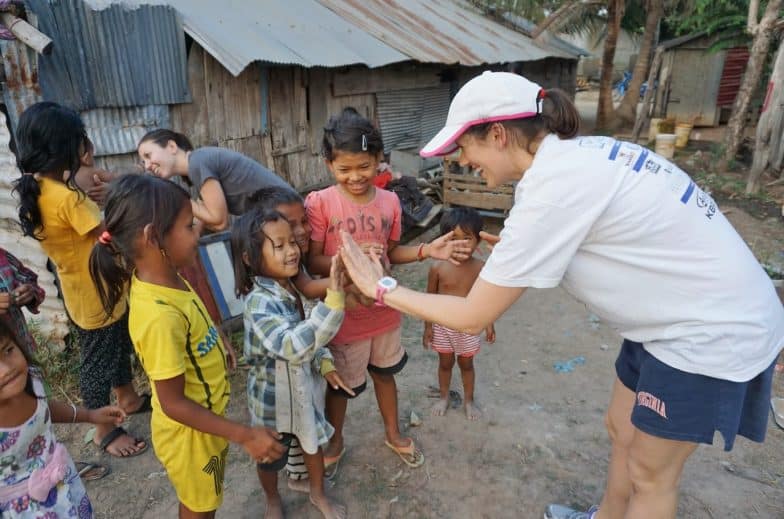