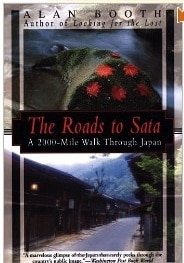 The Roads to Sata chronicles the 2,000-mile journey of a man who walked from one end of Japan to the other.  Author Alan Booth brings readers along on his journey while regaling tales of his days spent traversing the coastline, mountains and cities of Japan via its back roads.  Booth, an Englishman by nature, speaks fluent Japanese, has lived in Japan for some time, and is married to a Japanese woman, but doesn’t feel he quite understands the country.  This journey details his quest is to truly know Japan by walking its roads, observing its landscape, sleeping at its ryokans, and interacting with its people.

I read The Roads to Sata in conjunction with a book club I belong to, and while most in the group found this book a difficult departure from the usual literary fiction often discussed, I trudged onward through the book and was rewarded with a deeper understanding of the Japanese culture and country at the end.

What the book lacks in complexity of plot and characters, Booth compensates for with his vivid and elaborate descriptions of what he experiences.  Armed with a recorder that captures the days’ events and conversations, Booth transcribes his notes daily and subsequently fills the pages of this book with accounts so vibrant you can actually picture the setting he so painstakingly details.  His stories of evenings spent with sumo wrestlers, baseball teams, and random Japanese families range from hilarious to downright peculiar.

Though he was an Englishman, Booth was often mistaken for an American.  One tale of particular interest and humor involved him visiting an American military base.  Perhaps the most profound part of the entire book, however, is when Booth is rather aggressively mistaken for an American while visiting Peace Memorial Park in Hiroshima, at the site of one of the nuclear attacks.  His experience there provided important perspective for me as an American and helped me to understand how truly gracious the Japanese people are in sharing their country with us.

The Roads to Sata can be found through the MCCS Camp Butler libraries and was recently featured in Kadena Library’s book club.