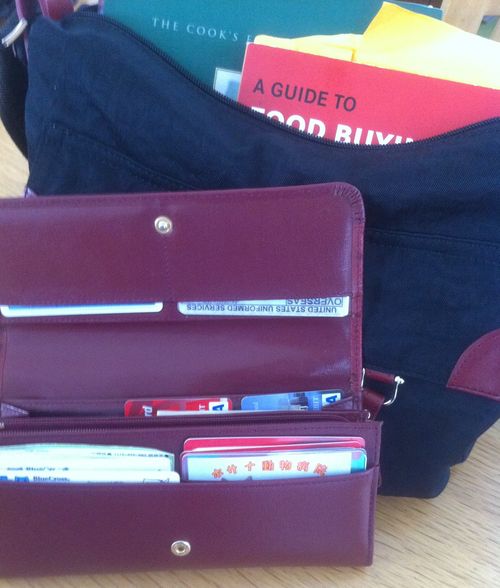 At the ripe old age of 40, I finally started carrying a purse.  My previous reasoning for just jamming a wallet in my pocket (causing a need to carefully plan clothing assembly each day) was that I would just lose a purse.  It had happened before, back in my early twenties, when I was concerned about fashion.  I lost several expensive purses by leaving them in restaurant booths, at my daughter’s preschool or (one memorable time) on top of my car.  Since we moved to Okinawa, though, I found that my small wallet was no longer sufficient.  In addition to the oversized drivers license that I procured after Newcomer’s Orientation, I now must manage two sets of currency, one of which is heavily dependent on coins.  So, out with the old wallet and in with a new, “big girl” accessory.  I found a great wallet with two coin holders, two currency pockets and enough slots for my regular cards, that oversized license and all of my new loyalty cards (Natori, San-A and Primo Grill).  A giant wallet.  A wallet so profoundly large that even my (now useless) winter coat, which can store a hat and chunky gloves in one pocket, could not handle it.  So I bought a purse.  I got it at San-A the same day I got my wallet.  I immediately transferred all the contents of my pockets (iPhone, keys, mints, etc.) to the purse.  I call it the “empty your pockets diet”.  I looked, and felt, ten pounds lighter.

The biggest advantage to the purse is that I can now tote along my Tools for Japanese Living.  This includes the wallet (with various denomination of Yen and Dollars), the iPhone (with free Japanese Translator apps, currency conversion app, map apps, and camera for taking pictures of signs to send to my friend who is fluent in Japanese and helps me figure out what stuff says) and books.  Books?  Am I so bored on an island such as Okinawa that I am forced to sit and read while I am out and about?  No, these books are tools.  Negotiating tools.  I carry two books with me so that I can shop in Japanese grocery stores with ease.

The first book was suggested by my husband before we moved here.  I bought A Guide to Food Buying in Japan by Carolyn R. Krouse on Amazon. I read it before we got here, and I must admit that I was more confused than when I started.  However, my first foray to  Family Mart for “bleach for the sink, not the laundry” was nearly effortless.  I simply turned to page 129, attempted to say the words shokki hyohakuzai and then pointed to the kanji and hiragana in the book.  The clerk seemed pleased that I was making an attempt at both Japanese cleaning standards and the language, and I was soon on my way.  I also located the appropriate gomi-bukuro (trash bags) for my off-base area using the book.  The black and white photos and pronunciation guide were very helpful those first few weeks.

On my first trip to a Japanese grocery to attempt to buy food, I forgot the book.  Sure, I could identify produce and a lot of basic items, but I was completely flummoxed at the selection of miso pastes (if that is what they were), utterly confused by the milk selection and shut down trying to locate fat grams on packages.  I could not ask the meat counter for “three pieces” of anything.  I timidly made my few paltry purchases and vowed to never, ever forget The Book again.

The next time I returned, I was properly armed.  The Book provides information about how to read a label (important to me because we need to watch fat, calorie and sodium intake), how to ask for certain numbers of particular items (Sakana o ni-hiki kudasai is “Please give me two fish” while Tara o futa-kire kudasai is “Please give me two fillets of cod”), and describes the difference between Western and Japanese items such as milk and other dairy products.

Next, I obtained The Cook’s Encyclopedia of Japanese Cooking by Emi Kazuko (with recipes by Yasuko Fukuoka).  This book has color photographs, descriptions of the uses of indigenous foods and nutritional information for many of the items.   There is a section about the kitchenware that is used, another on culture and a brief history of the cuisine of Japan.  The recipes in the second part of the book are easy to follow and everything that is listed as an ingredient is explained in the first part of the book.  Although this book is not specific to Okinawa, there are some familiar recipes in it.  My family has enjoyed having Miso soup made from scratch, stuffed abura-age (thin, deep fried tofu that can be split like a pita)  and homemade onigiri.  This book makes it easy, even for someone who prefers to throw recipes (and caution) to the wind.

These books make it easy for me to be confident in the grocery store; confident that I can find what I want, that I can try new things without wasting my family’s hard-earned money (on things that they will not or cannot eat), and confident that I can ask for help without bringing (very much) interpretive dance into the mix.