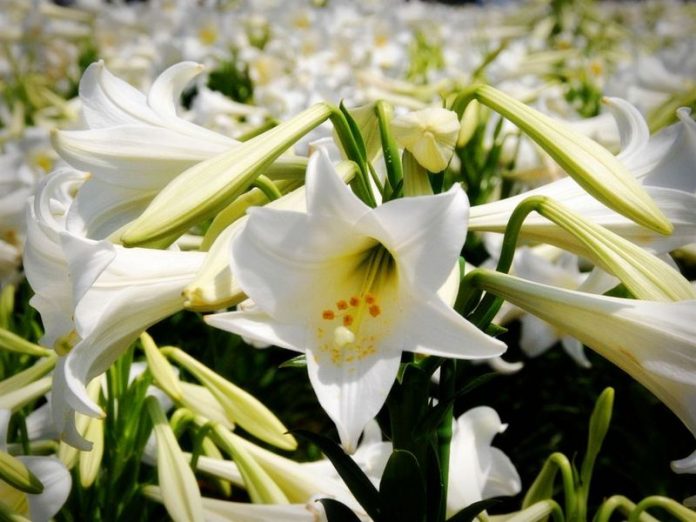 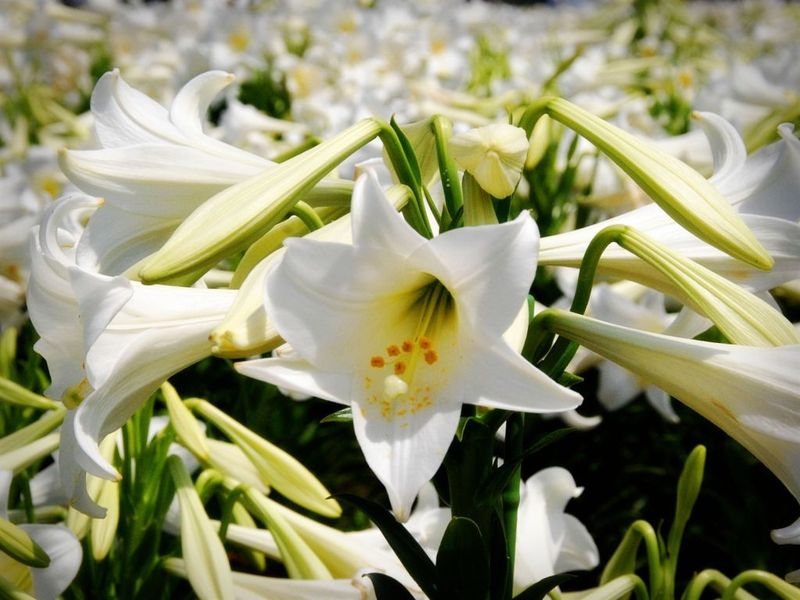 If you have dreams of dancing while being surrounded by thousands of beautiful lilies or maybe you’re just looking for a nice family outing, the Lily Festival (Yuri Matsuri) is the place to go.  The Festival runs through May 5th.  Here are details from our experience at the Lily Festival last Sunday —

For our ferry ride from Motobu Park to Ie Island, we got a nice cold coffee out of the vending machine to drink while watching the island get smaller and smaller during our thirty-minute ride. My kids got a kick looking at the side of the ferry for flying fish, the Exocoetidae (they’re quick, so my girls only got to see three).  We had planned on taking our vehicle (it’s like our security blanket), but you had to have a reservation to take your car during the weekend we went. If we had taken our car, it would have cost us about 6500 yen; it all depends on the length of your automobile.  Now that I’ve gone to the Lily Fest, I wouldn’t recommend taking your car – you really don’t need it at all.  During the festival, the ferry boat leaves every hour on the hour.

Once we got off the boat, we veered to the right where buses were waiting to take ferry passengers to Lily Field Park.  We paid our 200 yen for the adults and 100 yen for the kids (one way), sat back and rested during the ten-minute bus ride.

Lily Field Park is a field with tons and tons of lilies, mostly the white Easter Lilies (teppoyuri) and a patch of varied colorful lilies. There’s a path to walk on that takes you around the park so you can see each and every lily, plus stop and get a bite to eat from the many food vendors (there were none of the usual carnival game vendors).  At the other end from where the bus drops you off, there is a small petting farm with bunnies, chicks, goats, pigs, ponies and ostriches. Huge kiddie fun.  In the middle of the park, a big tent was set up where music was being performed.

We spent about two and a half hours there checking out flowers, eating, petting animals and taking photos.  It’s a great, peaceful and calm family outing.

There was one thing about the bus, make sure you check when the last bus leaves to take you to the ferry.  There was a sign on a little building right across from where we unloaded the bus that clearly stated the last bus left at 3:30 on the day we were there.  We didn’t notice the sign until we were getting back on the bus… at 3:30, phew!

Fee: Entrance to the festival is free, though if you choose to take a bus from the ferry dock to the field there may be a cost

Pro Tip: Ferries for Ie Island can get very crowded during the Golden Week holidays, which run from April 29 through May 5. You are highly recommended to visit the festival before Golden Week begins to avoid the crowds and enjoy a stroll around the lily garden in a more relaxed setting.

To get there: Ie Island is located about 30 minutes by ferry from Motobu Port.  Take the Okinawa Expressway to Nago, then followed the signs to Motobu Port.  Not once did we have to do a “went the wrong way turn around”, so it was pretty simple to get there.