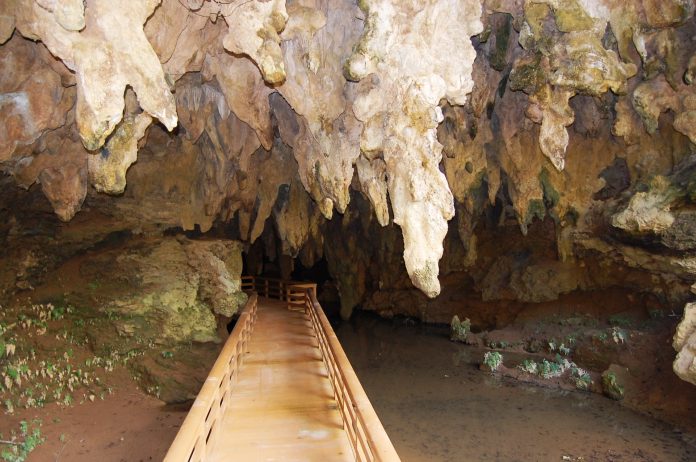 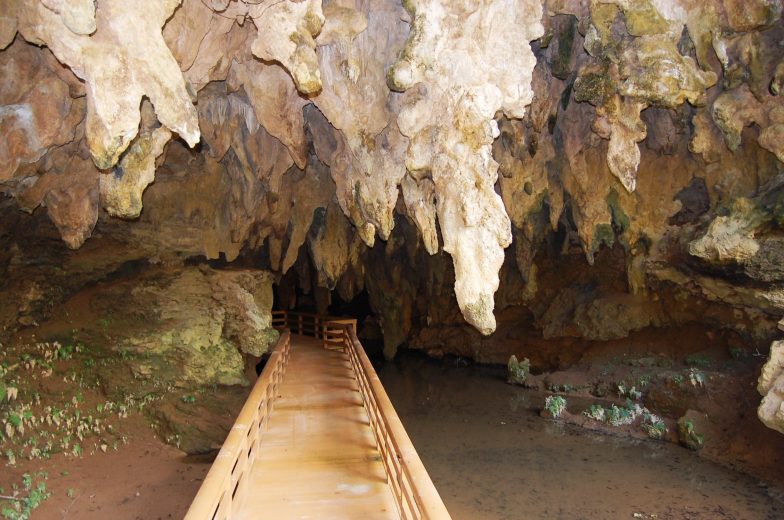 The first stop is at a gajyumadu (banyan) tree a few hundred meters away from the Taiken Kouryu Center where your field trip initially begins. Our guides, Ken-san and Yuichiro Nakamura-san, explained to us the significance of the gajyumadu trees planted in Matsuda (and many other parts of Okinawa as well) which was to offer shade; protection from the destructive winds of typhoons; and a place for the community to gather. The gajyumadu is also said to be the type of tree that kujimuna—the mischievous redheaded fish eyeball eating Okinawan sprite—inhabits. 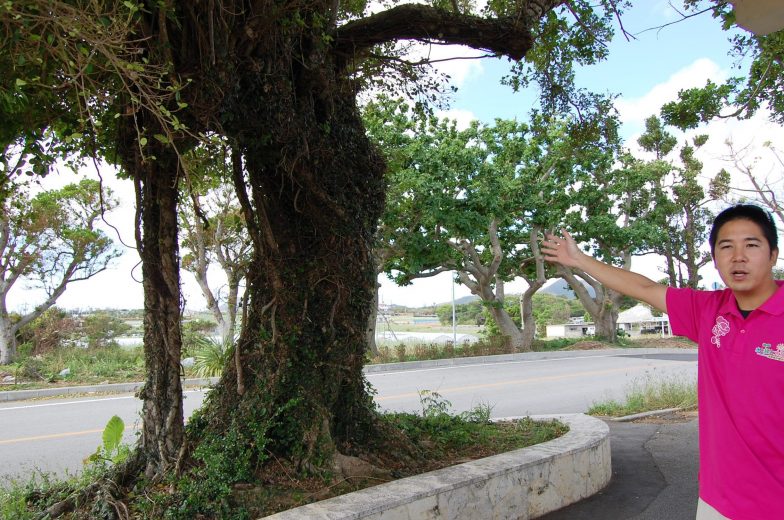 The second stop was to the Joiya-mai-hiroba. This has historically been a gathering place for Matsuda’s residents during Obon and the Shishimai (lion dog dance) during harvest time. There are three influential families in Matsuda, and the Joiya family is one of the oldest and most distinguished. The circular hiroba (open space or public square) abuts the Joiya family’s home and their beautiful terracotta haka (tomb). Due to car accidents along this road (the streets of Matsuda are not straight but curved in the old style way of village building) the Joiya haka had to be relocated a few hundred meters away from where the hiroba now occupies. 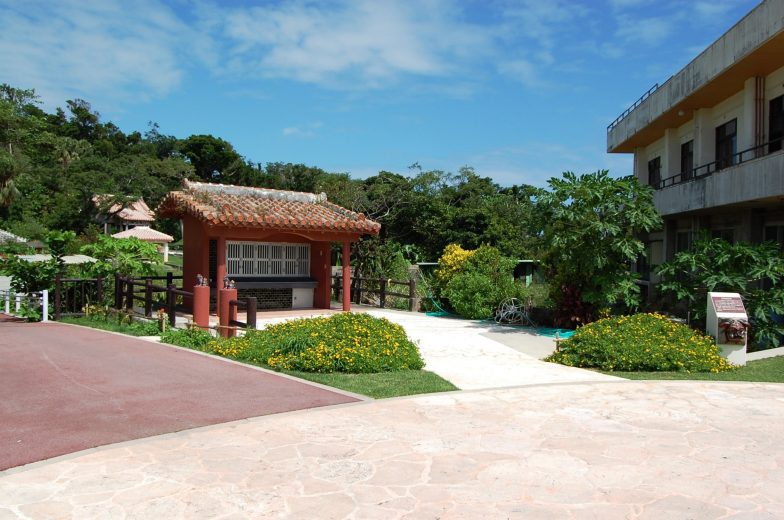 The next part of the tour takes you up a small hill to the Kushi no Utaki (a stone kami-ya [god house]) where the Matsuda people believe is the birthplace of their town and where they worship the kami-sama (god or deity). Utaki are usually built in elevated places (such as the mountains or hills) and beach areas where the ocean can be seen. The reason for this is because the Okinawans believe that life began in the ocean. And the ocean is where one returns when he or she dies. Blacksmithing also took place on this hill. 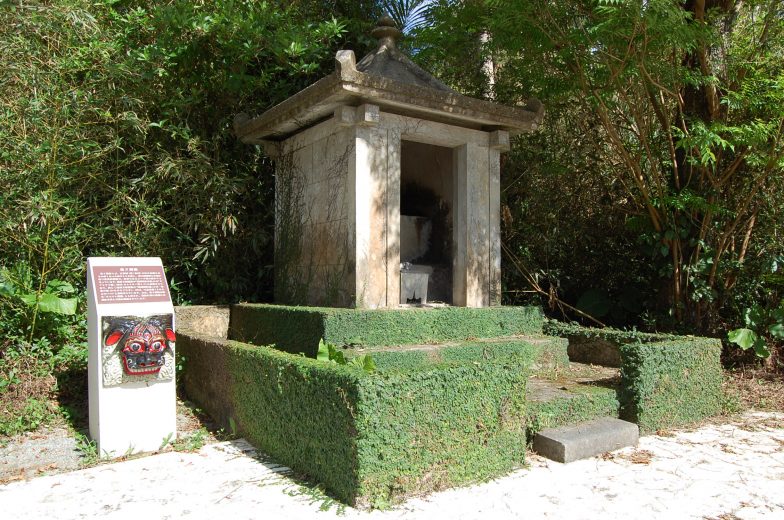 The Nibuya family owns the land where the Kushi no Utaki sits and the house below surrounded by a special wall. A Meiji-era Shuri King gifted the rocks and permission to the Nibuya family to build the wall as a reward for babysitting the children of the royal family and their entourage when the king would visit Nakajin-jo (castle). In olden times, Okinawans were not allowed to build walls to fortify their homes taller than the height of a man as this one once stood. Only the king could do so uninhibited. However, after WWII the Nibuya family fell on hard times and sold off some of the wall’s stones in order to survive. Some of those stones are in Ryukyu Mura. 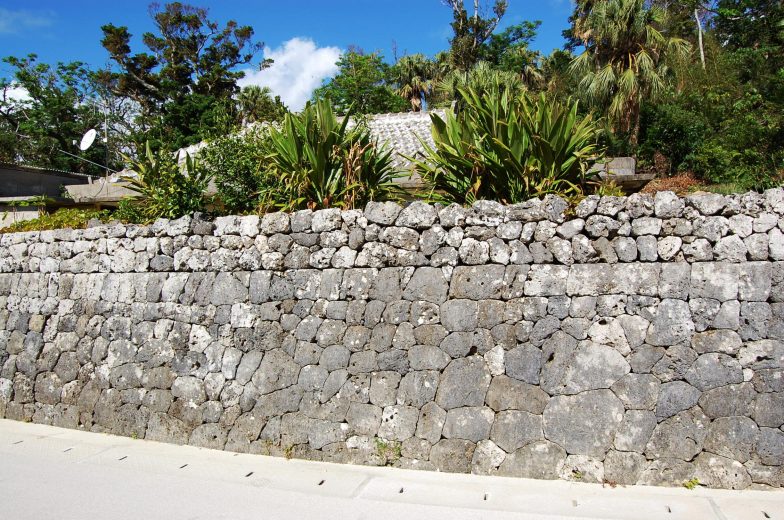 Next to the Nibuya residence there is a kami-asagi (worship house) where the noro (priestesses) come to pray for the town inhabitants four times a year in February, March, May, and June when the farmers plant crops. To the right of the kami-asagi is yet another impressive haka flanked by shishi (lion dogs). This haka is owned by the Hokamaya family and sits directly across from the path winding down towards the Mēgā Gama Cave, where legend has it a serpent once preyed on the town’s young women fetching water from the cave’s mouth. To help, the Shuri king sent a bōzu (Buddhist monk) to Matsuda to defeat the serpent, which left after the Obōzu prayed for it to go away. The Obōzu eventually settled and married a woman in Matsuda. His tomb is located near one of the entrances to the Mēgā Gama Cave where his bones once rested. 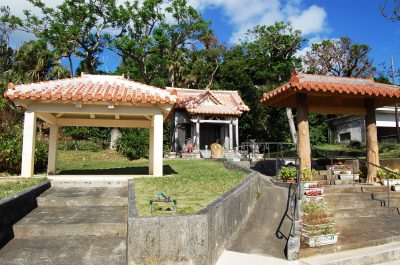 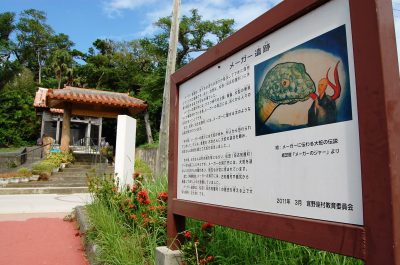 The first entrance to the cave is accessible to the general public. Here mountain water flows or trickles (depending on the time of year) within the great maw of the limestone cavern. Two small concrete blocks off to the right of the cave serve as an altar and memorial where Matsuda’s people come to pray for the tens of thousands of Okinawans that took refuge in its depths during WWII. 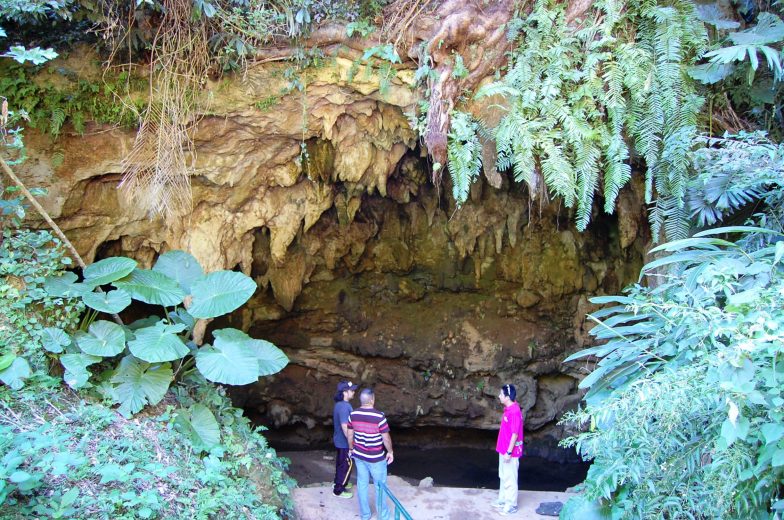 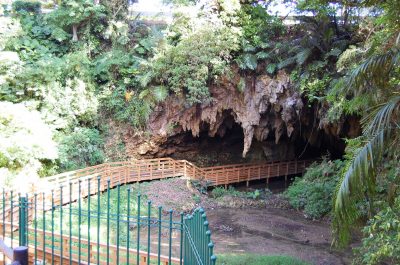 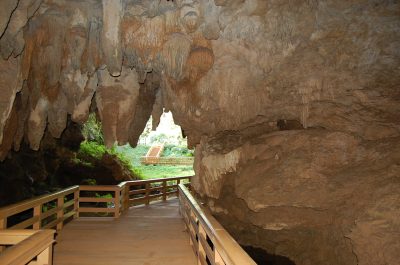 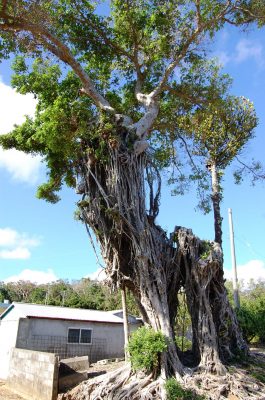 he end part of our tour consisted of visiting Jahana Street where a tall gajyumadu and a fukugi tree grow. The locals refer to the two intertwined trees as the “Happy Tree,” where couples walk through its rooted entrance and are foretold to one day marry one another.

Lastly, we were taken to the Ashibina area of Matsuda where fukugi trees surround a small amphitheater-type grounds and where the shishi (Matsuda’s mascot) comes to watch the town’s people perform for him during the shishimai (lion dance) every two years. There is a curious stone placed near the spot where the shishi watches the performers. Our tour guides told us that the older residents of Matsuda do not take kindly to people touching the stone, for it is where the shishi is believed to live! 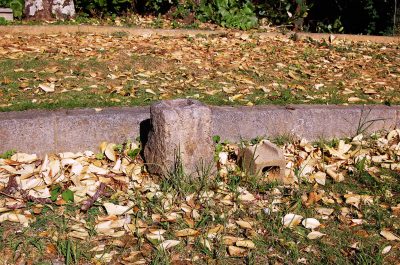 Directions: Driving north towards Nago on the Okinawa Expressway, exit the Ginoza 9 Toll Road and make a left onto Route 329. After passing Gallivant Bakery on the right hand side of the road, you will see a large blue billboard indicating that Highway 224 is up ahead within 300 m. This billboard serves only as a marker (Do not take the 224 to Maehara!). Immediately after seeing this first billboard you will take a right onto the next street with a map placard  on the corner and a white street sign pointing the way towards the Taiken Kouryu Center. The Taiken Kouryu Center is the yellow painted building with a red terracotta roof and flags posted outside. 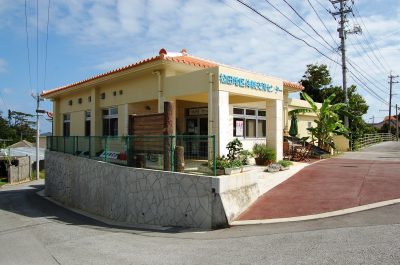 Parking: Visitors are asked to use the parking lot behind the Taiken Kouryu Center. Parking your vehicle along the narrow streets of this residential area is prohibited.

Tours are scheduled three times a day.  Those times are 10:00 a.m., 1:00 p.m., and 3:00 p.m. It is imperative that you not be late to your tour appointment time and that if you are a non-Japanese speaker you reserve a tour through the Taiken Kouryu Center website a few days before you plan to visit.

Tour Reservation Website: https://ginozanavi.com/inquiry/ the first box you see on the form is for your name; the second box is for your cell number; and the third and fourth boxes ask for your email address twice. If the email addresses are not the same, the reservation will not go through. So be sure to check how you type your email address for accuracy! Finally, the large comment box at the bottom of the page is where you make your reservation request. Indicate the Mega Gama Cave and Remains Tour as the one you wish to go on. English is okay! I would personally try to schedule a tour at least a couple of days—if not a week before—I plan to visit. This gives the English speaking tour guide an opportunity to plan for your visit and comes at absolutely no additional cost to you. Ken Matsuda (the English speaking tour guide) works for the Taiken Kouryu Center only part time. He owns a medal mounting and name tape shop in Ginoza and cannot leave his shop unattended on short notice. So please reserve your tour online beforehand.

Additional Notes: Your price of admission is the only cost you have to anticipate incurring during your visit. The staff at the Taiken Kouryu Center are personable and bend over backwards to be helpful. When we returned from our tour, the staff stuck around to answer our questions and shared a roasted chicken with us they had brought to work. It was like spending an afternoon with family! This is a great tour for school field trips and PME outings. Matsuda is amazing! 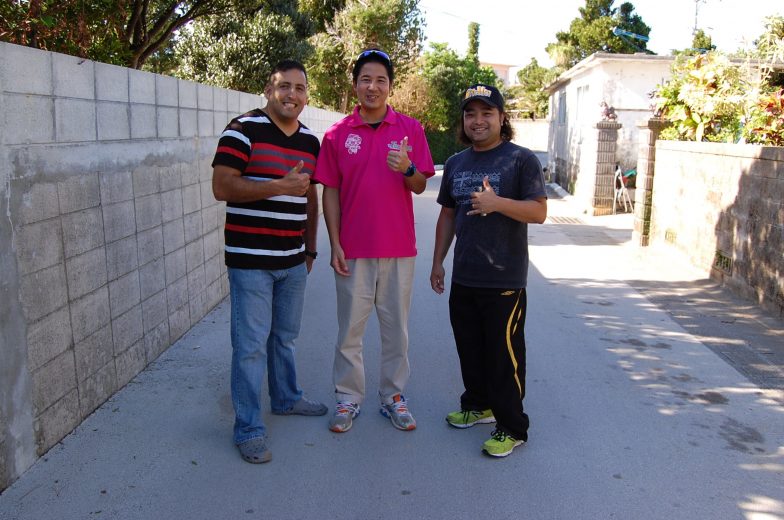