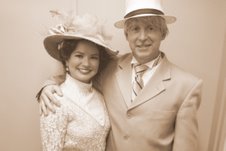 My parents instilled a love of live theatre in me from a very young age. My family has always been involved in local community theatre. At first it was just my father and then my sisters began to act in the plays as well. While I was never able to overcome my intense stage fright I enjoyed being there to support them. I loved watching their plays unfold as they worked towards the finished project and clapping profusely on opening night.

While I was living in New York I was privileged enough to attend the theatre often. I saw many Broadway plays and a few off-Broadway plays and they were all wonderful. As much as I enjoyed the more professional plays I have seen there will always be a place in my heart for community theatre. There is something magical about community theatre. The curtain rises and before your eyes your neighbors, friends and family change into wonderful characters. They are able to weave a magical tale and transport you to another place and time. At the end you stand up and applaud not only because the play was entertaining but because you know how much hard work went into it.

I was overjoyed to find that we have our own community theatre group on the island – POPs. POPs or the Pacific Okinawa Players groups is a non-profit volunteer organization. They are dedicated to providing quality live theater to Okinawa and they try to put on 4-5 shows every year. The money they raise from their performances is used towards future performances and to award the Ed Kirstein Memorial Scholarship to deserving High School seniors who wish to pursue “the arts” in college.

Chrissy Miller, a local actress, shared the following thoughts about POPS with me.

“I first joined POPS in December of 2007 when I auditioned for the show “I Love You, You’re Perfect, Now Change.”  Back home in Silver Spring, Maryland, I had been actively involved in community theatre taking part in numerous productions (actually my very first theatre experience was as “Molly” in the musical “Annie” when I was 7 years old :)).  It seemed only natural for me to join a community theatre group when we moved here to Okinawa in October of 2007.  If you’re new to the island, it can take some time to make friends, so POPS was perfect for me as it allowed me to meet new people and gave me a creative outlet.  I wasn’t working for the first 8 months after we moved here, so being involved in POPS gave me the opportunity to find some purpose.  You have to remember: people who participate in POPS (whether it be as an actor, a crew member, or a production staff member) don’t do it for the money (this is a volunteer organization after all) they do it because they HAVE A PASSION and love for the theatre.  Everyone here is very professional.  I think that’s my favorite part….everyone is serious about the theatre.  They are dedicated to making quality theatre available for the public here on Okinawa to enjoy.  If our audience leaves enjoying our performances and feeling inspired then we have fulfilled our duty.  Furthermore, theatre is not just for the elite.  Everyone should have the chance to watch a quality production.”

Another local actress Caroline Dees was also kind enough to tell me how she felt about performing with POPs.

“I can’t believe I get to do this! I can’t believe I get to do this!” That thought has been running in my head since I was first cast (after a knee knocking audition, seriously they were knocking together) and rehearsals began for Ragtime, POPS current production. Everyone needs an outlet and for many of us this is it. I’d done a show with community theater just one time before but that was 12 years ago. This is the first time since that it worked out for my family. Now we’re trying to figure out how to get one or two more shows in before we PCS in June. There is something so exciting about watching a show come together from start to finish. Between the directors, production staff, crew and cast members, there is a constant striving for our best, individually and as a group. I’m a firm believer that we all crave connection and the theater has just that. In the end, to give the gift of your best to an audience is a privilege that is thrilling.”

You don’t need to be an actor or an actress to get involved with POPs. Good plays take much more than actors and actresses. They also need help with everything behinds the scenes like sets, lights, sounds props etc. There are so many ways you can share your talents with community theatre. If you would like to get involved with POPs then you should attend their General Meeting on Monday, Oct. 13th, 6:00pm at the Camp Foster Performing Arts Auditorium. As the POPs website says “Bring your ideas. Bring your friends. Bring your enthusiasm to Okinawa’s Community Theater!”.

Please check the website for up-to-date information about the plays that are currently in production, and the dates/times of their shows.