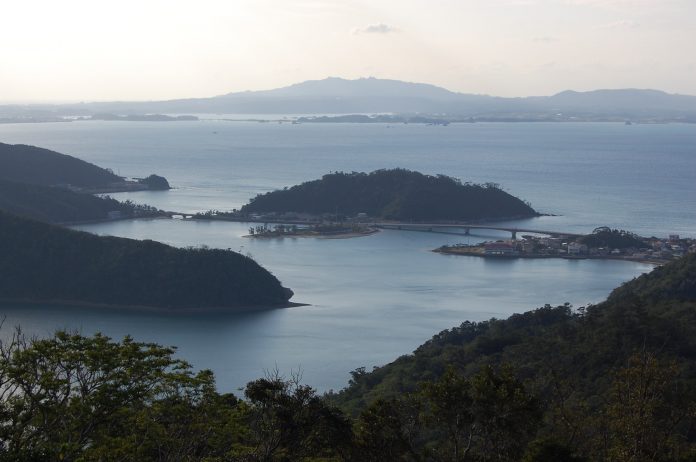 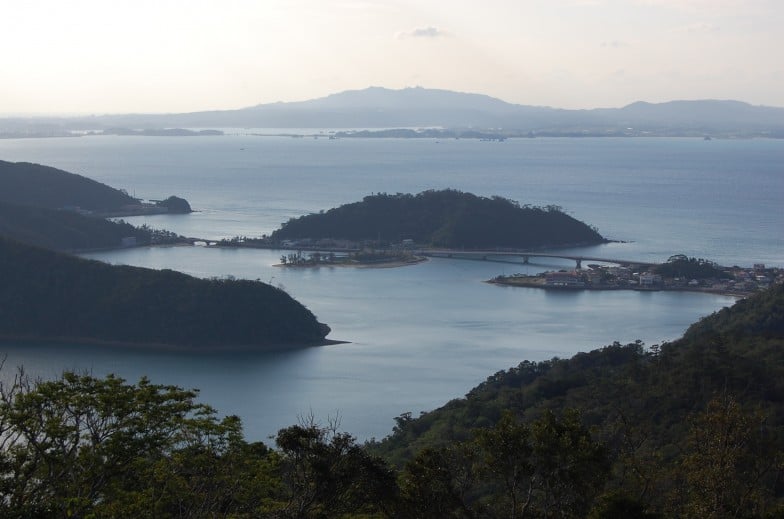 Perched high within the Ogimi mountainside is a lovely overlook area once belonging to a defunct resort hotel (Shah Bay) which closed in the mid-nineties. Shah Bay’s Mutabaru Observatory is a leftover remnant of the resort’s better days, and peers out onto the East China Sea, Motobu, Yagaji-jima, Kouri-jima Bridge, Kouri-jima, Route 58, Miyagi-shima, Shioya Bay, and Shioya Bridge below. The views from this lookout area are always at their best on sunny cloudless days, but can be beautifully foreboding as well when the weather appears less than optimal. 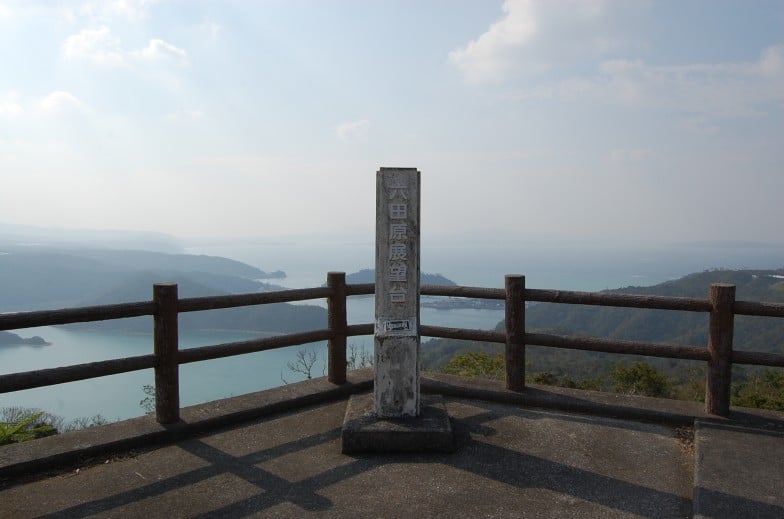 The observatory has a trellised area with picnic tables and benches. There are bathrooms and a Dydo machine in the immediate vicinity too. If you look to the right of the bathroom you will see a placard and the statue of a yamashishi (wild boar). The placard gives visitors an overview of the history of the yamashishigaki (wild boar gate). It is basically a four hundred-year-old stone wall that surrounds Ogimi’s farmlands. Entrance to the Yamashishigaki Mutayama Trail is just behind and to the right of the monument where rickety faux wooden steps snake up the hillside. The trek is at least a two-hour hike. 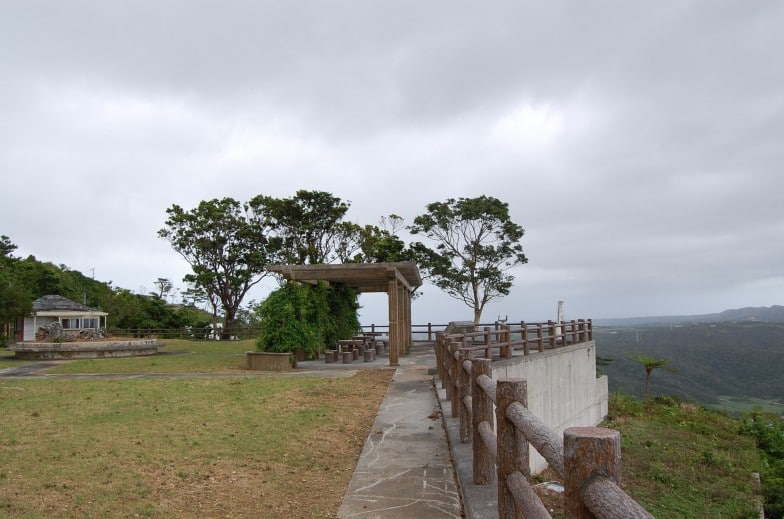 Though evidence of human activity—namely graffiti—might initially give visitors pause to explore the area, the observatory and nearby grounds appear to be maintained seasonally and are (for the time being) open to the public. 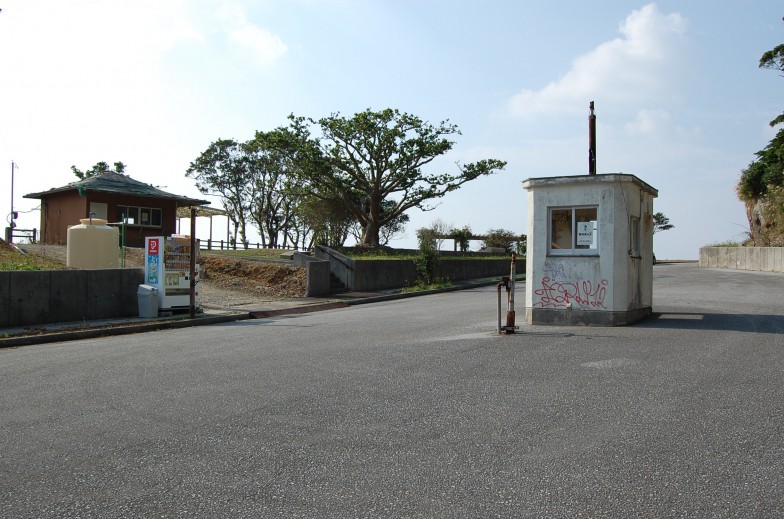 Across the street from the bathroom and monument is a park where a large water fountain sits in disrepair among a circle of Hoop pine trees. 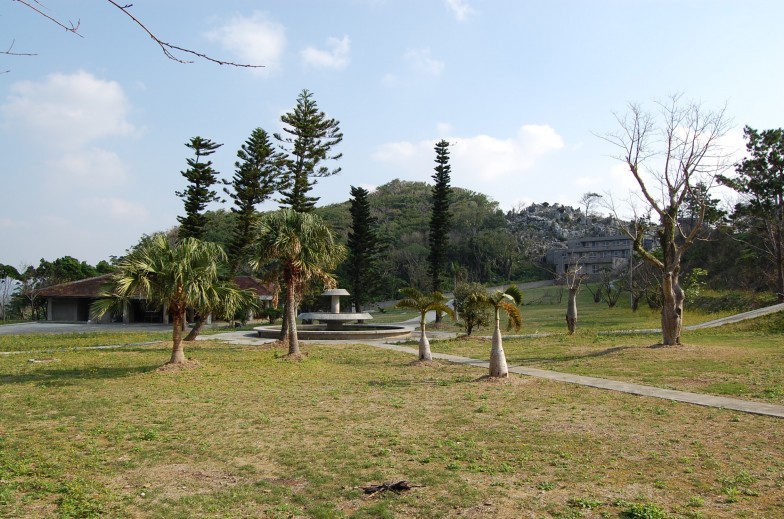 To the left, a dilapidated welcome center building seems to be serving as someone’s makeshift storage shed. But it is the imposing karst rock formations rising alongside Shah Bay’s main resort buildings and cottages that draw the eyes of visitors upwards. These rock outcroppings and buildings with their faded facades encircle the entire park area below, while lending an air of solitude and melancholia to the general landscape. 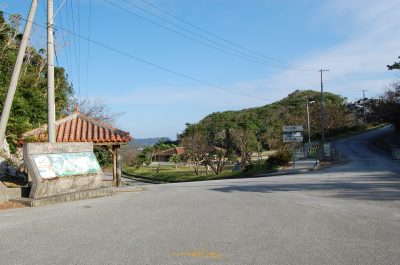 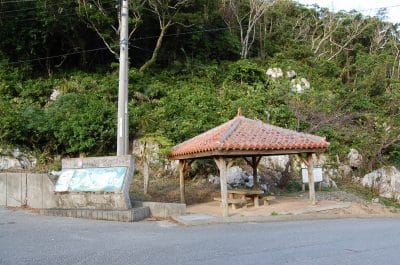 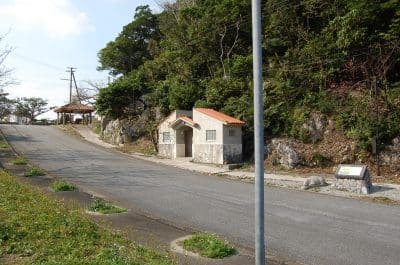 But as tempting as it might be, (Yeah, I know what you are thinking!) the resort and cottages are completely off limits to the public in much the same way the Royal Hotel (aka Haunted Hotel) near the Nakagusuku-jo ruins in Kitanakagusuku are. Two reasons for this being: the overall structural integrity of the resort’s buildings has been compromised after decades of inoccupation and neglect, and—most importantly—Shah Bay is still a privately owned property. According to an Ogimi tourism official, Shah Bay Resort was bought by a developer a few years ago. Although there were plans to level the resort, demolition has ceased for the time being (unfortunately, the official was unable to elaborate any further on the matter). 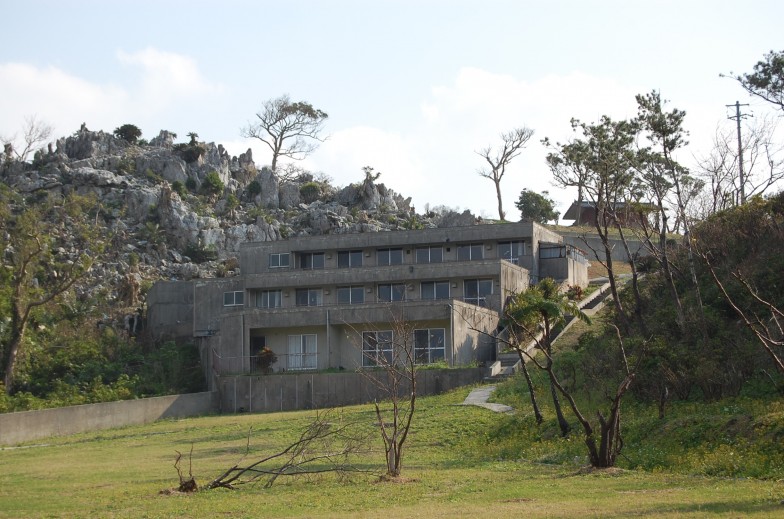 Not only are there signs and concrete barriers presently blocking the entrance to the resort, but there is often a groundskeeper on site performing menial duties with his keitora (light truck) parked just past the barriers. I would not advise anyone to trespass. However, if you absolutely must know what the resort looks like from the inside, content yourself with the few YouTube videos and blogs dedicated to the matter. I’m almost positive the people who took the video and pictures of the resort did so before the present owner bought it.

Other than that, enjoy the views! 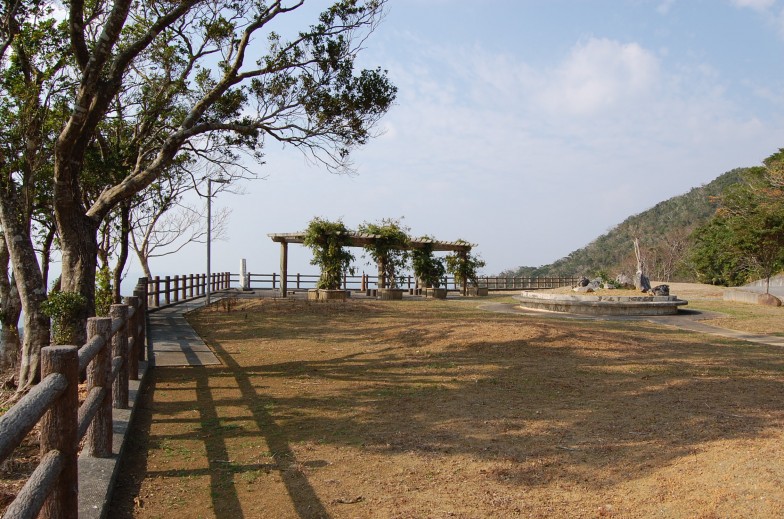 Fast Directions: Take the Okinawa Expressway Toll Road north to Nago and get off on the 10 Toll Exit. Continue north along Route 58 through and past Nago. You will see signs for Ogimi Village eventually. When you do, start looking for a blue billboard pointing towards Highway 9 and Taiho Dam. This is only a landmark. Once you see this billboard keep on the 58 and drive completely across the bridge over the bay (These are Shioya Bridge and Shioya Bay.). Once you have done this you will soon pass under two blue billboards for Route 331 to Higashi. Make a right onto the 331 once you see the second blue billboard (these billboards are not far from one another). Follow the narrow street you turn onto as straight as you can until you come out onto a road facing the bay. Make a left. You will eventually pass a set of three stone monuments (two black and one white) next to a small parking area on your right. They make up the Shinsho Miyagi Monument. However, don’t let this distract you because immediately after this there will be a street on your left with an elongated faded blue and white sign post. You should still be able to make out the words Shah Bay on it. A red arrow on the sign directs you to turn left. Turn left and follow the steep, winding road all the way to the top of the mountain. Be careful. This road is in sore need of repair and shows evidence of landslides!

Safer Directions: Take the Okinawa Expressway Toll Road north to Nago and get off on the 10 exit. Continue north along Route 58 through and past Nago. You will see signs for Ogimi Village eventually. Keep driving along the 58 until you see two large colorful driftwood fish sculptures on the left side of the street. These are landmarks. Once you pass the fish sculptures immediately get in the right turn lane. There should be a sign with an owl and the word Minori written on it. Turn right onto this road and drive for about another 10-15 minutes. You will want to look for an orange mirrored post next to another directing you towards the Yamashishigaki (Mutayama Trail) 3.2 km. Follow this sign by making a right. You will start to come upon houses and shikuwasa orchards down this road (This is Ogimi’s district of Oshikawa). Be on the lookout for the second Yamashishigaki (Mutayama Trail) 1.0 km sign on the right. Turn right and follow the steep road all the way up. Shah Bay Mutabaru Observatory will be at the top. 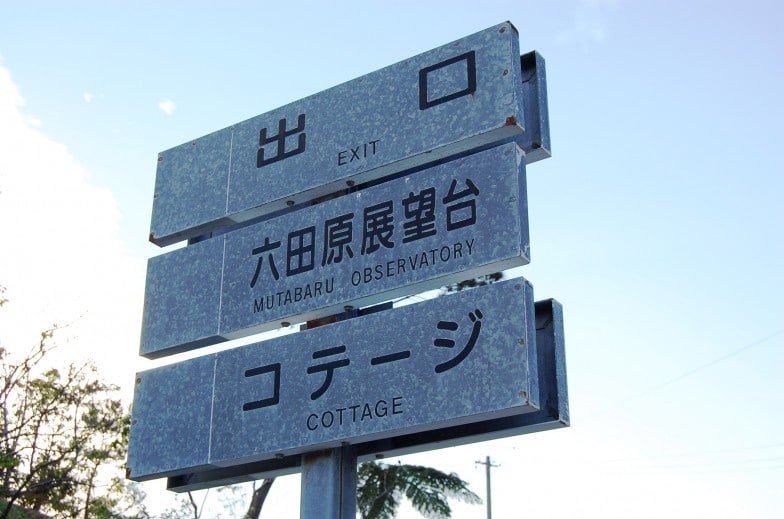 Additional Notes: The steep road described in the fast directions portion of this review is lined with cherry trees and is absolutely beautiful towards the end of January during Okinawa’s Cherry Blossom season.