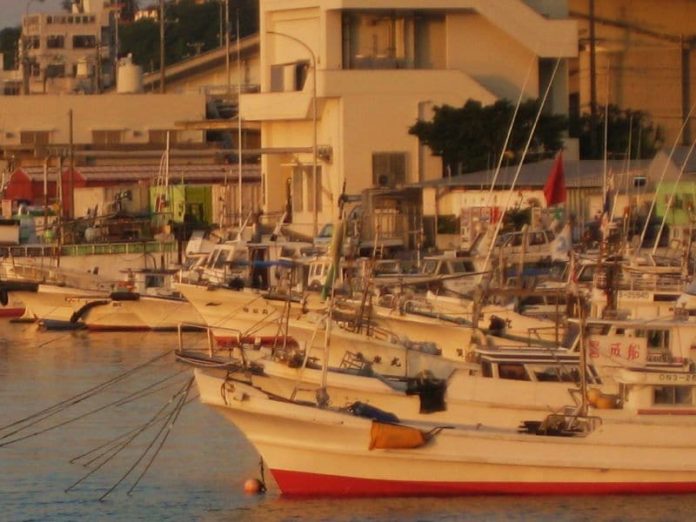 A relatively short ferry ride from Tomari port in Naha, Zamami is part of the Kerama islands. It’s a popular dive/snorkel/beach destination in the summertime and the main place from which whale watching tours are launched in the late winter and early spring. The round trip fare will vary depending upon which ferry you choose, but keep in mind that neither can transport cars. If you have a SOFA license, though, you can rent a scooter and zip around just like the natives. If you really want to get fancy, there are car rentals available as well.

Tomari port is very easy to get to. Head south on Route 58 toward Naha past Camp Kinser. Cross the bridge after Kinser and take a right at the third traffic light – you will see Tomari port on your left. Take your first left into the port parking lot. There are two ferries available there – the Zamami Ferry (transit time ~two hours) and the high speed Queen Zamami (transit time ~one hour).

Tracy and I took the Queen Zamami, whose office will be immediately to your right when you pull in to the Tomari Port parking lot. The Zamami Ferry will cost you about 4000 yen round trip and the Queen Zamami will cost about 5500 yen round trip. Parking is free – just ask the person at the ticket counter exactly where you can park. For timetables for either ferry, click here. Select the links under “Boat Schedule” on the right side of the page. The website is in Japanese, but the timetables are pretty easy to read. If you wish to stay for more than a day, there are small hotels and B&Bs on the island that are quite reasonably priced. Bring plenty of yen with you, as we found that few places on the small island accepted credit cards.

View From The Top

We found Zamami to be absolutely gorgeous with an uber-relaxed feel. The island is small and everything you would want to see or do is within reasonable walking distance. Scuba and snorkel rentals are available all over the island as well. During the high season, you can even rent snorkel gear right on the main beach – Furuzamami. At other times of the year, be sure you rent your gear before you leave Zamami village and head out to the beach. The guy at the rental shop was even kind enough to give us a lift to Furuzamami, about 1.5km outside the village, after we picked up our gear. If I remember correctly, it was about 1000 yen for each of us to rent snorkel gear.

Nothing says “Lush Tropical Island” quite like an Hibiscus flower

Like I said, the high season for diving and beach going is during the summer, so when my wife was here over Christmas the island was virtually deserted. We could not have picked a better day to go, though. Over the time she was here, every day was rainy and/or overcast, except for that one. The sun was out and the temperatures must have been in the 70s. We spent the day lazily strolling the island, availing ourselves of some of the food unique to Zamami, snorkeling, and stretching out on the almost deserted beach.

On that half-mile stretch of golden sand we saw only two other couples the whole day and nobody seemed to have a care in the world. With crystal clear water and live coral close to the shore, the snorkeling was nothing short of phenomenal. All and all, I could not have imagined a more perfect day.

For more information, check out this English travel guide to Zamami Village, Okinawa.

Note from the Editor: What about you, readers? Have any of you followed up on your desire to see the outer islands? Let’s here it!