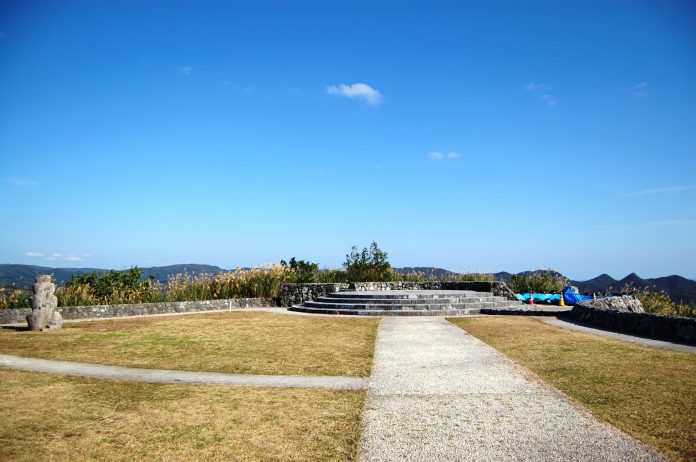 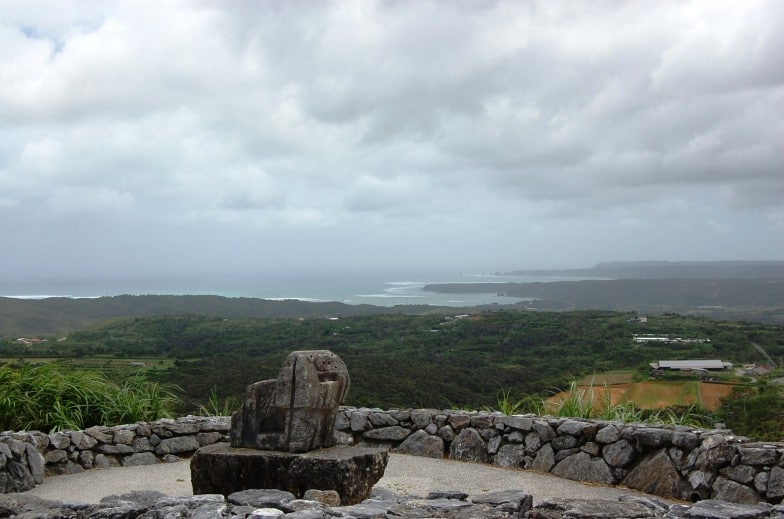 High in the mountains of Ogimi there is a wonderful lookout area that offers visitors a near 360̊ panoramic view of northern Okinawa. Some of the things one can expect to spy with his or her little eye at the Ishiyama Observatory are views of the East China Sea, Pacific Ocean, Okuma Beach, Higashi, the unique Shark Fin Rock formations of Teniya, and even as far and away as the distinctive mountain outcrops that rise near the Cape Hedo area. 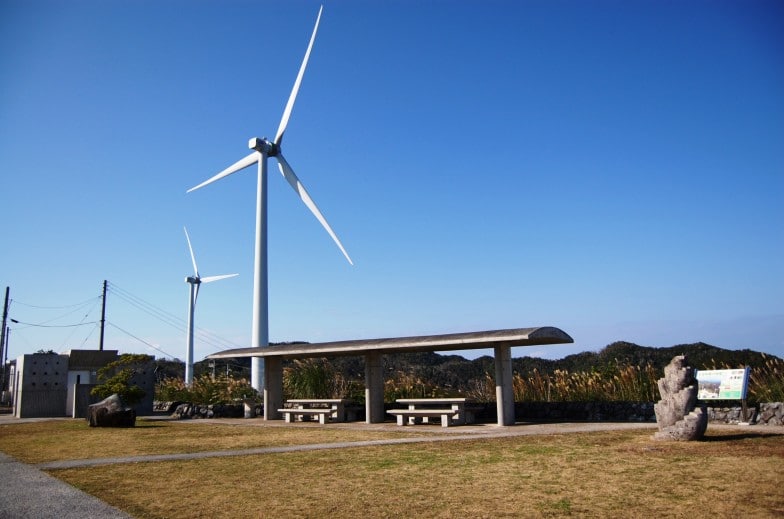 These wind turbines are managed by the Ogimi Wind Power Generation Plant—the same company that oversees the upkeep of the Ishiyama Observatory park area. 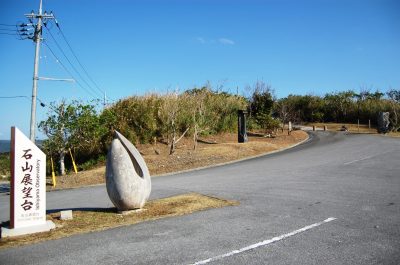 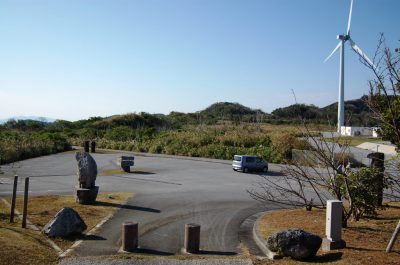 There are several modern sculptural art pieces scattered throughout the park grounds, especially near the entrance where the footpath leads out towards a bathroom and a concrete covered picnic area on the left; the observatory platform dead center; and a view of the Higashi coastline within the confines of a low built stone wall enveloping the park. 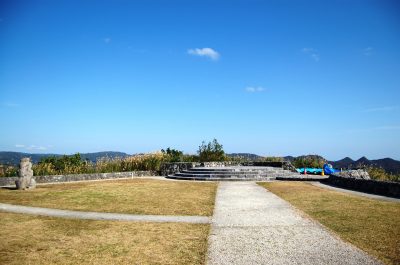 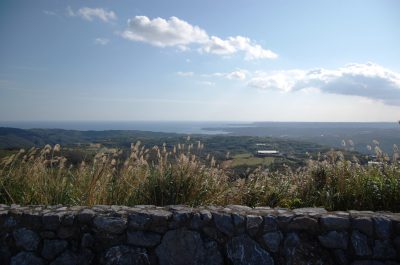 At the time of this writing there is a stone shisa that now lies on its side covered in blue tarp and marked off by traffic cones to the right of the observatory platform area. Unfortunately, during the last typhoon the island experienced, the shisa was knocked off its base that it once sat perched upon. Although the park’s caretakers have not gotten around to putting the shisa back to right place, the functionality of the observatory and use of the grounds is not especially compromised in this writer’s opinion. Remember, a smidgeon of common sense can often save one from becoming a Darwin Award candidate! 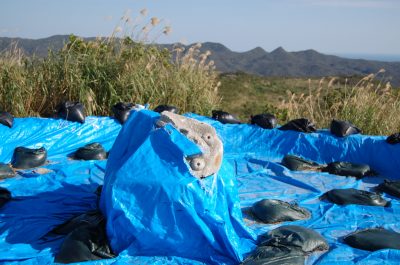 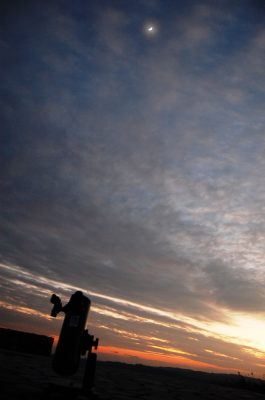 Quirky mountain peaks, almost Tim Burton-ish in their look, form the backdrop directly behind the observatory platform which offers experienced and novice astronomers alike an area to view celestial events (e.g. meteor showers, moon viewing, comets, etc.) with the benefit of little to no light pollution. Just remember to check the weather conditions before trekking all the way to Ogimi to star gaze, since it is quite the drive!

However, to make the trip to Ishiyama Observatory all the more worthwhile for you skeptics out there, there are definitely other attractions to visit while in the vicinity. Igimihakinzo Park, Yamashishigaki Trail, Shah Bay’s Mutabaru Observatory, Taiho Dam, Café Chya Chya and the shikuwasa orchards of Oshikawa are all pinpoints of interest you may find in the area. Though there are signs posted along the roadside for most of these, don’t be too intimidated to explore the surrounding countryside until you stumble upon them as we did, or bother to get out of the car and ask directions. Providing you have the name of your destination in hand, the locals are often quick to point you off in the right direction. 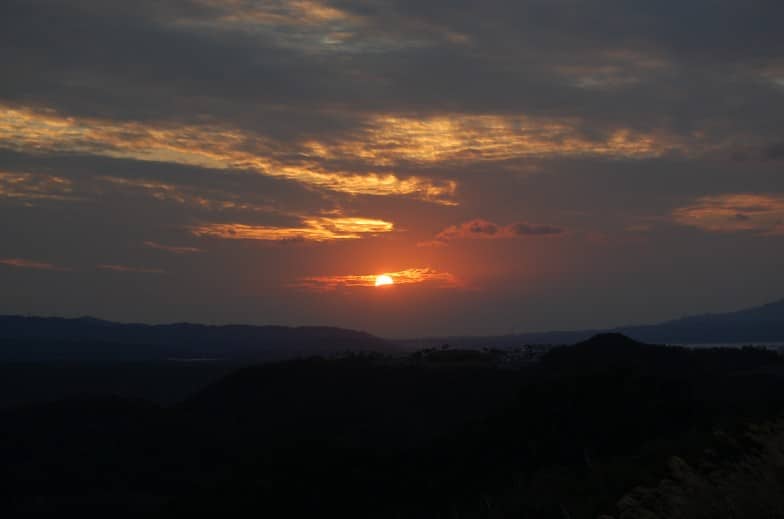 Directions: Take the Okinawa Expressway north to Nago and get off on the 10 Toll Exit. Continue north through and past Nago keeping on Route 58. Keep on the lookout for two brightly colored driftwood fish skeleton sculptures on the left-hand side of the road (If you’ve ever made the trek up to Okuma or even Hedo Point from the 58, you’ll know of the distinctive sculptures I speak of). Immediately passing these sculptures you should look for a road off to your right with an owl and the word “Minori” painted on a sign. Get in the right-hand turn lane, turn, and follow this road straight up the mountain for approximately 10-15 minutes. Once you see the two towering wind turbines off to your left, park in the Ishiyama Observatory parking lot to your right. 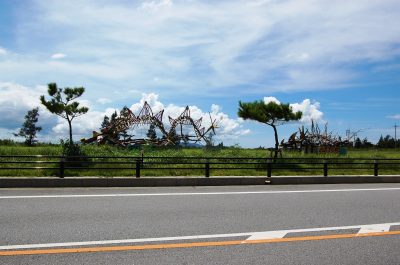 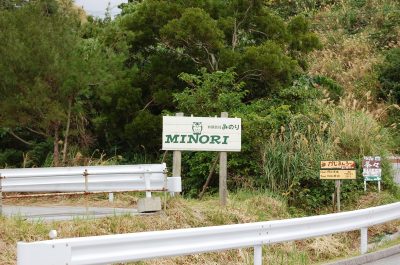 Additional Notes: If you plan to visit the observatory at night, bring a flashlight since the lights in the bathroom do not work and there are absolutely no lamps in the park to light your way after dark (It’s an observatory!). A jacket and pre-packed snacks would also be wise to bring along too.

You should also be aware that there are definitely wild boars in the area! So be careful driving around the mountain’s wide curvy roads. You’ll soon discover that your vehicle will have a nasty tendency to want to keep to the middle of both lanes, which is not good coming around corners. I bring this up because we almost hit a wild boar standing in the middle of the road next to a crow of all things (Yeah, you read that right!). Unfortunately, by the time we all came to our senses with what we were seeing, I fumbled the camera badly and missed my shot just as the boar leapt off into the brush and the crow flew away. I’m not sure how aggressive or wild Okinawan boars are supposed to be, but I think we all remember what happened to Old Yeller and should try to exercise some caution when off in these remote areas.