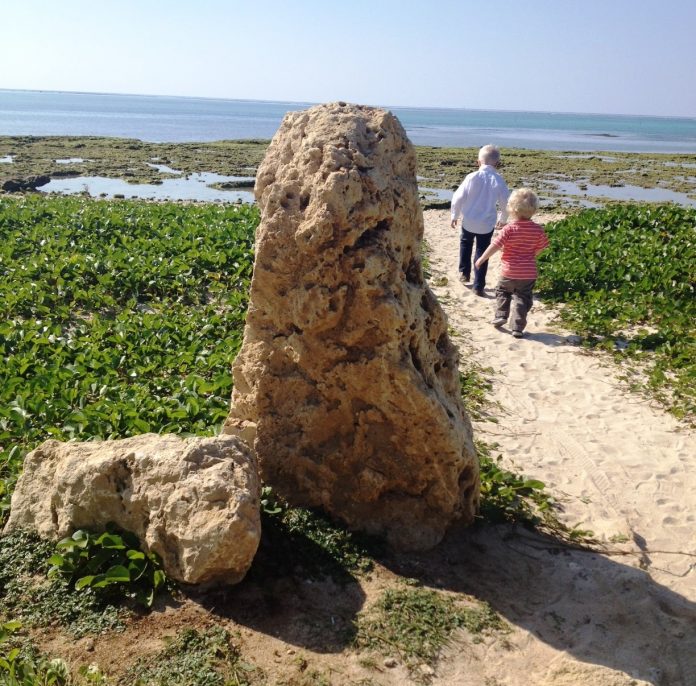 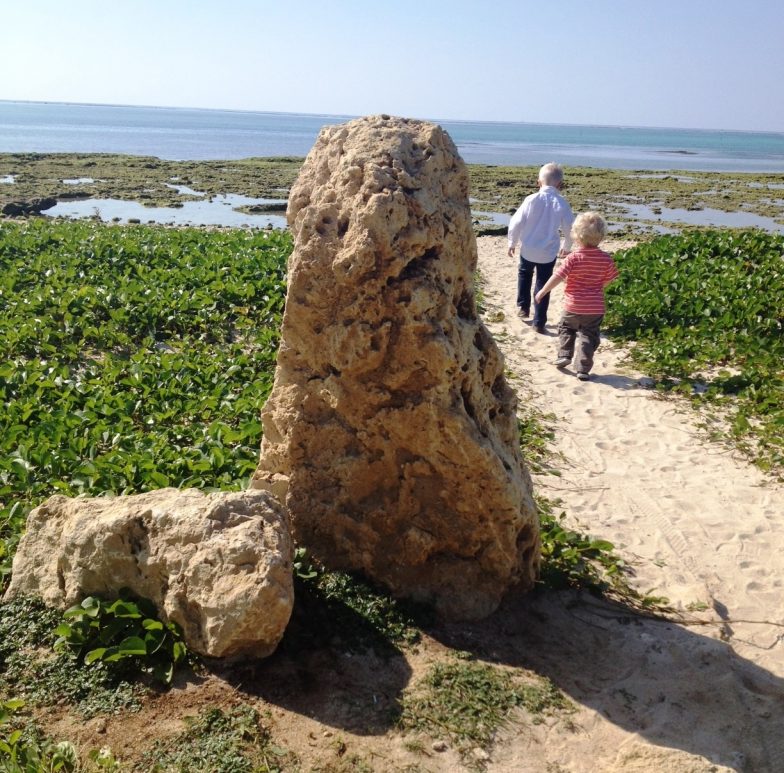 While I love to explore everything as much as I can on Okinawa, my main driving force to do so is to discover new playgrounds. Senaga Island has a playground in the shape of a giant crab! My boys loved climbing up the back and sliding down the other side.  While the playground and island are quite small, it has much to offer. 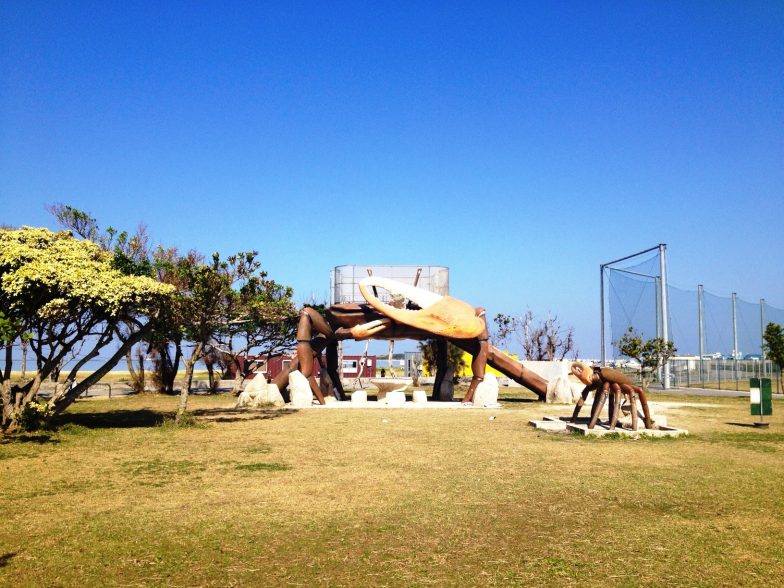 Senaga Island is located a short distance to the south of the Naha Airport and is a part of Tomigusuku City. It is connected by a causeway to Okinawa and the perimeter is approximately 1.5 kilometers.

The first thing that you will notice about this island is that it is in the direct path of airplanes taking off from the airport. The park is on the north side of the island, and we were able to enjoy watching the various types of aircraft fly by overhead. We couldn’t believe how low they were! At times the roar of the jets can get pretty loud and hurt young ears. 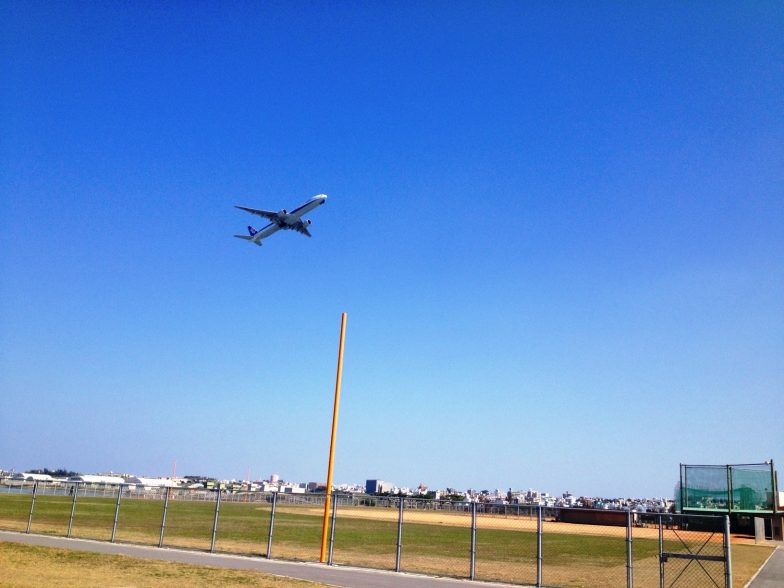 Many of the shops and paid activities are near the park. We noticed at least two cafes and an amusement park with bumper cars and a batting cage. A few baseball fields are in the area as well. We witnessed many people were enjoying the island by exploring the tide pools in low-tide, taking a stroll along the road and couple of windsurfers off the coast. The beautiful Ryukyu Onsen (hot spring) Senagajima Hotel is on the island as well. 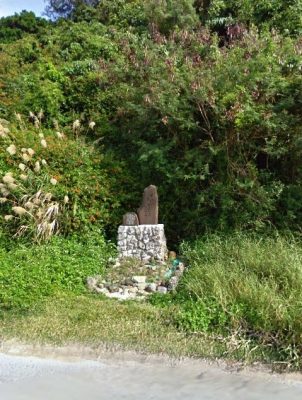 Senaga Island, or Senagajima, has a very interesting history. Legend states that the origins of Tomigusuku began with the child of Amamikiyo, who was the first to inhibit the island. Amamikiyo was the goddess who had created the Ryukyu Kingdom. It is also stated that Senaga Gusuku (castle) was the residence of Senaga Aji, the local chieftain. In 1936, the island was chosen as one of the eight most scenic locations in Southern Okinawa. Around 30 families inhabited the island on the north side, and the people made their living with agriculture and fishing.

There were numerous ancient remains on the island that included: places of worship, springs and wells. Many people from all over Okinawa came here to worship. During the Battle of Okinawa, the residents were ordered off the island. After the war, the entire island was requisitioned for a U.S. military base. Residents were forced to resettle on the south side of the island.

Construction drastically changed the geography of the land by burning a large section and connecting the island with separate two roads. The base was created to be a storage area for the U.S. Navy ammunitions. The island was returned to Okinawa in 1979.

Many of the cultural sites were destroyed during the base construction and the rest were in restricted areas. Today, few ancient sites remain on the island. One popular site is the Kodakara Iwa, or the Fertility Stone, on the south side of the island (pictured above right). The original stone was a large coral rock a few meters high that had two holes, one at the top and one at the bottom. If you wanted to have a boy, you threw a small rock through the top hole. If you wanted a girl, you threw it through the hole on the bottom.

The south side of the island has undergone a lot of construction. There is now a nice grass area, sidewalk and restrooms with access to the beach. 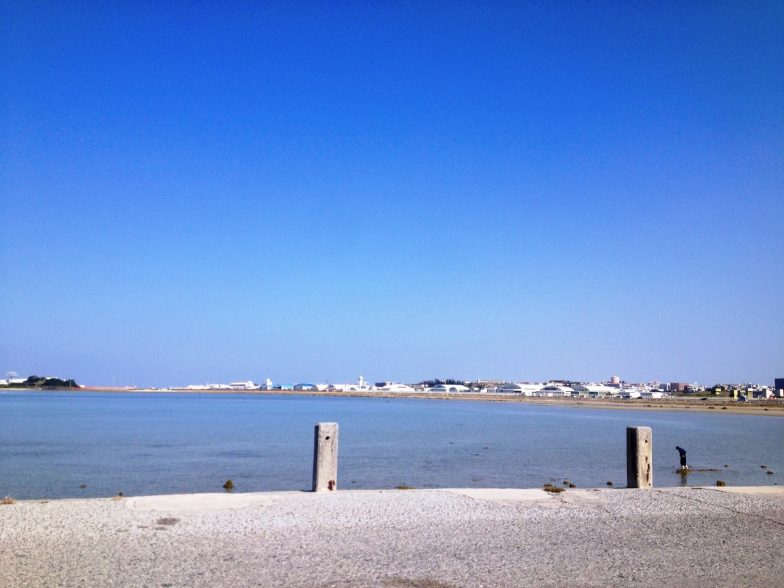 This island is an excellent choice to witness the sunset. A friend of mine likes to watch the airplanes take off into the sunset and into the evening. I hope you enjoy this island as much as I have.

*The information about the island has come from the various signs around the island.

Directions: Go south on the 58 through Naha. Continue onto the 331. This will be at the divide by the airport. The 331 is the left lane. After approximately 3 miles (5 kilometers), the 331 splits to go straight or to the right. Turn right to follow the 331. Turn right at the next intersection. This goes onto the causeway to Senaga Island.

From the expressway: Head south. Go towards Haebaru and the 506. Take the Nakachi exit and continue on the 331. Turn left onto the 331. You will see signs directing you this way. Turn right at the next intersection. This goes onto the causeway to Senaga Island.