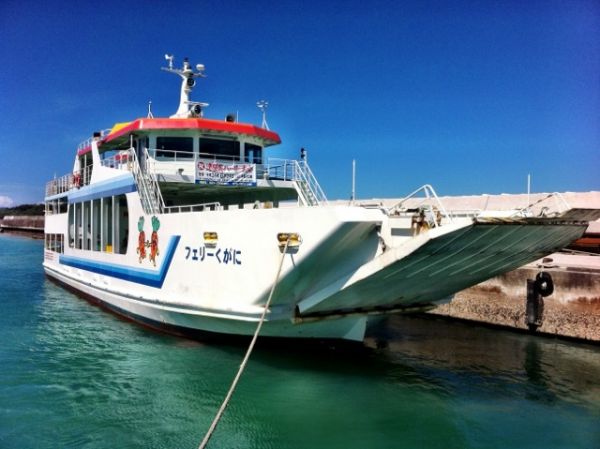 Tsuken-jima is a nice get away easily seen from White Beach or Katsuren castle. Also known as “carrot island”, this place has a lot to offer and worth a day trip. I invited some co-workers to explore this place with me since the summer had finally arrived. The ferry schedule can be found from various sites to include Kadena ITT’s site. We picked the perfect day to set out and didn’t know it.

First, we arrived at Heshikiya Port and had trouble parking. There were so many locals lined up ready to depart the for the island. We paid the round trip ferry fees and boarded “Ferry Kugani”, which is the largest of the three in the fleet. We headed to the front of the ferry for the views, but fell victim to the heat and smell of the ship’s exhaust. During the 30 minute ride though, we passed White Beach and took some nice pictures before our arrival to Tsuken Port.

As soon as we landed, we could hear traditional local music being played and dragon boats circling around on top of small Daihatsu trucks. It was the beginning of a ceremonial race, and by the time we rushed off the ferry, they stopped (figures). We couldn’t get any pictures (yet), so we headed northwest. The famous walking trail lies along the west side of the island and begins with a vista with a well and prayer site.

Unfortunately, the trail isn’t well kept, and there is tremendous overgrowth. The jungle has taken over and there are armies of mosquitoes waiting around every turn. The trail isn’t safe for walking and misleads you if you’re trying to explore it. Use the main road instead and save time. Once you see the radio tower, you are near another site.

Very close to the radio tower, to the west of the main road, there is a park with a really cool scultpture and the carrot shaped observatory that stands next to the trail. There are spiral steps that lead you to a full view of the entire island and a panoramic view of the Okinawa mainland.

Further north, the first opening to beach can be found between some houses. We walked down the beach to the rocky shores where the shade was. The beach had a lot to offer as far as watersports, but we preferrred to snorkel. The waters were warm, clear and sandy. There isn’t a lot of coral and not a lot of fish, so we didn’t take too many pictures in the water.

After the hour and a half of snorkeling, we were hungry and headed back to the port. When we got back, the dragon boat tournament was already under way. We snagged some soba and bento boxes from nearby shops in and around the port and watched the races. We walked to the edge of the port and waited for our ferry. The smaller ferry “Tokiyo 3” took us back in half the time, but was very overcrowded. Next time we visit, we will explore the east side of the island since it seems more suitable for snorkeling.

Directions:  To get to Tsuken Island, you need to hop on a ferry from Heshikiya Port at the tip of Katsuren Peninsula. To get to Heshikiya Port from Kadena Gate 2 or 3, head east on Pref. Route 85 into Uruma City. Turn left on to Pref. Route 33 (Maehara Intersection) towards Katsuren peninsula. Turn right at Pref. Route 10 towards Katsuren and continue straight until it becomes Pref. Route 8. Before coming up to White Beach, there will be a white sign that directs you to turn left. Proceed down this road and you will drive straight into the port.

Price:  They charged us 1,350 yen for a roundtrip ticket, which may be more in the summer season.