Editor’s Note: This is the third installment of Quentin’s adventure to Kumejima. Click on the following links to read the others: Part 1, Part 2 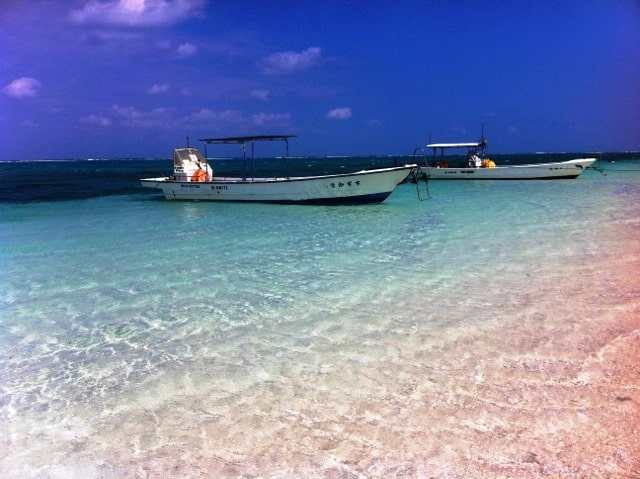 It is now my second day on Kumejima. The previous day was very busy traveling from site to site, and it was then time to relax. The original plan was to relax and settle in or go snorkeling the first day, since I was arriving in the afternoon, and spend the entire next day sightseeing. Again, be flexible in your planning, because the plans do change, especially when dealing with schedules. Prior to taking off on the unplanned sightseeing adventure switched to the first day, I had made my reservation to one of the most famous beaches in Okinawa, named Hatenohama. 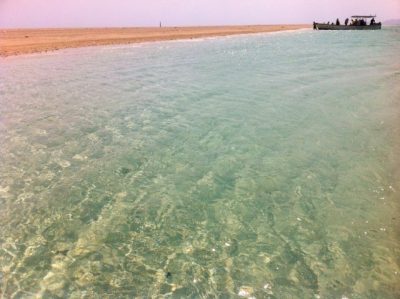 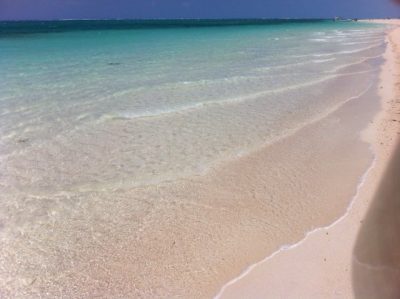 Since this trip begins at 9:00 in the morning and lasts until 2:00 in the afternoon with Eef Sports Club, I wasn’t able to go the first day as planned; my ferry had arrived to Kume too late. Before checking into the trip, I went to the CoCo’s convenience store for a quick breakfast. I bought snacks too, even though lunch is provided on the trip (I get very hungry very easily.) The check-in location was in front of the Eef Sports Club building, behind the lobby of the Eef Beach Hotel. There are lawn chairs in front where you sit and wait. They ask that you pay right before the trip starts, which is 5,500 yen for the entire trip, lunch and parasail. 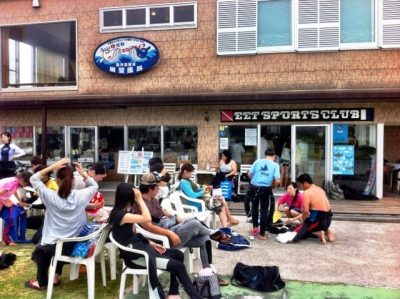 Before leaving, you have the opportunity to rent whatever you need for the trip. The staff gives you the trip breakdown and safety briefing, as well as the transportation arrangements. They tell you to wear your swimwear going out, since it’s less clothing to carry, and you will get wet on the way out to the beach. On this particular day, everyone was advised to wear wetsuits. (YOU’LL KNOW WHY SOON ENOUGH) Depending on how many people show up, they may have to split the group up into two since their small bus to the nearby port can only fit about 20 or so people. On the trip I went on, I was on the second wave of people to get on the bus.

Once at the nearby port, called “Tomari Fisharina,” two speedboats are ready to depart and take you on the 30-minute ride across the shallow teal water. 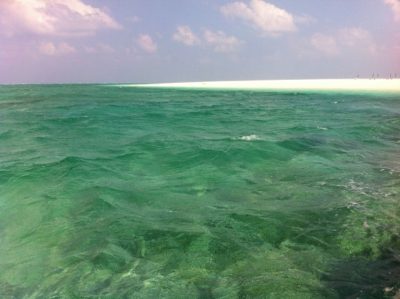 Life jackets are free of charge and readily available on the boats. You have to wear them. It was very windy that day and the water was moderately choppy. As soon as the boat cleared the port and set out, the waves pounded the front of the boat and sprayed water over everyone every few seconds. EVERYTHING GOT WET. Combined with the wind, it was like being outside in the beginning stages of a typhoon. It was hard to see and take pictures, unless you are smart, and wear your goggles and snap some shots using your waterproof camera (like me!) 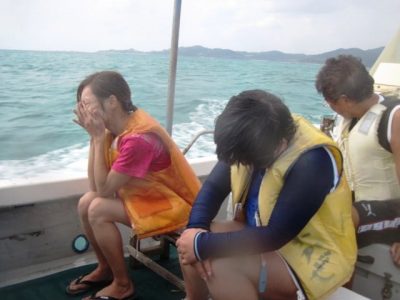 After 20 minutes of ocean spray, the boat changes direction and finally, I got a sneak peek of the island. The last 10 minutes of the trip, we rode parallel to the island chain until reaching our own portion of the island. Unlike Komaka jima, Hatenohama does not have any large hills, rocks or cliffs. It is just a sandbar, with parts submerged underwater in low tide. I know the part of the island they dropped us off at is the larger one spanning a few kilometers long a few hundred meters wide. There is no dock, so you make an ever wetter landing than Komaka by using a ladder in the front of the boat to get ashore. 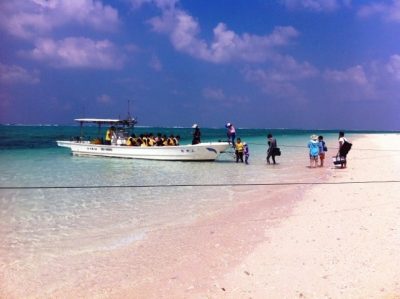 Once on dry land again after being soaked, you are almost ready to get in the water. The staff rallies everyone together at the station on the island for a final safety brief and schedule. After that they set up the parasails and chairs (if you bought that too) and carefully monitor everyone on the island. The weather calmed down a bit and the water did a little too. Since we were all wet from the ride, most people went and snorkeled in the designated swim area. I went and took a few pictures before going in the water. There is not a lot of coral, but plenty of fish. 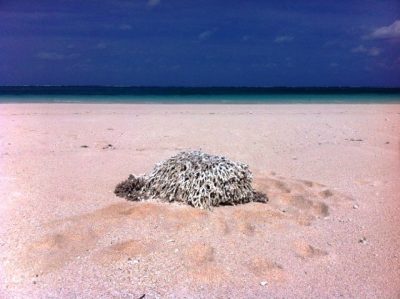 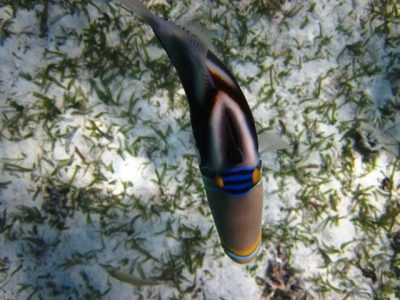 ALWAYS bring vienna sausages or a pack of hotdogs for the fish; IT NEVER FAILS IN OKINAWA. There are a variety of fish and squid that will come up to feed if you are patient and not seen as a predator. 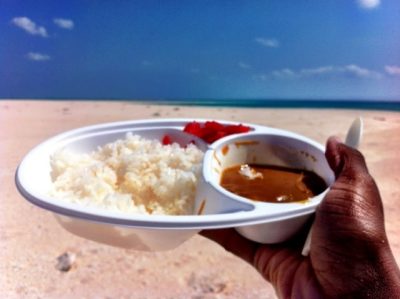 After eating, I didn’t feel like going back into the water just yet since the sun was now blazing and had dried my suit completely. In fact, I didn’t feel like doing anything, so I just laid down under the parasail. After not realizing that I had fallen asleep, I woke up suddenly thinking I was left behind. It scared me for a second since everyone had scattered after lunch to take pictures. Since the beach was so big, there was plenty of room to roam. We were the only people on that section of Hatenohama, so for a split second, I really thought I was alone. I decided to take more pictures and relax under the warm sun for the remainder of the trip.

Finally, when it was time to go, we boarded our boats and made our way back across sea with the 30 minutes of bumpy ocean spray. (Yes, we all got soaked again.) The bus was waiting at the port to pick us all up again, and after being dropped off back at Eef Beach Hotel, I went back to the hostel and took a shower. There was still some things to see before leaving Kume, and I had just enough time to do it.  More to come!

– backpack (water resistant) with a waterproof case to protect valuables