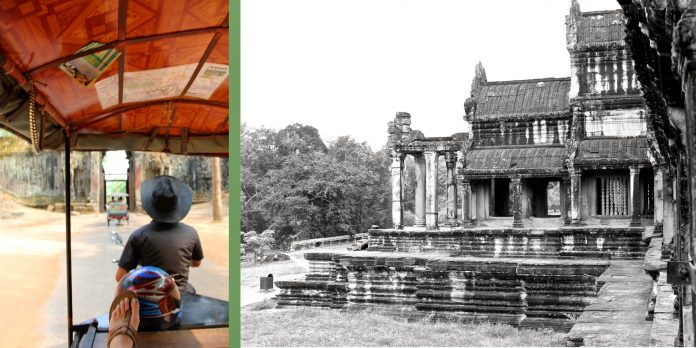 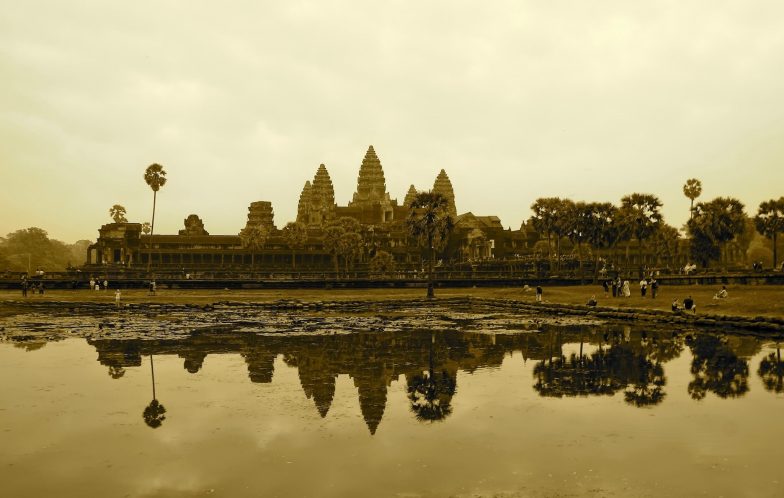 The second day in Siem Reap we decided to play smarter, not harder. So, we hired a tuk-tuk driver and headed back out to Angkor. It was o’dark thirty and we were hoping to catch one of those amazing sunrises over Angkor Wat that you hear about. It didn’t work out like that, but it was still awesome to see Angkor Wat lighten up right before our eyes. 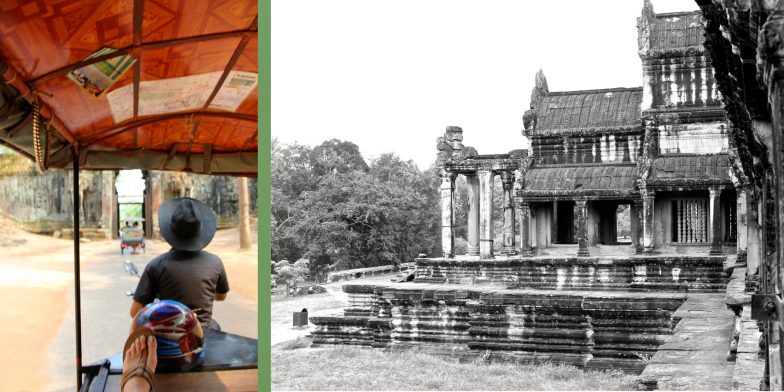 Tabitha had a really detailed Angkor book so, while we waited for the sun to come up, we read up on what we would be seeing. She actually read to me throughout the entire Siem Reap leg of our trip and, although the book was heavy and bulky, it was nice to know the stories and everything associated with the carvings throughout all of the temples. 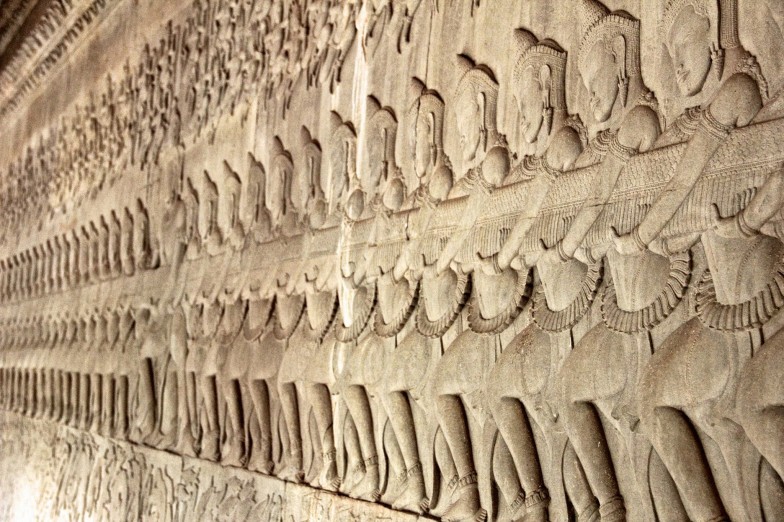 It wasn’t so busy that early in the morning because a lot of tour groups come for sunrise and, then, they leave for breakfast. We stayed and enjoyed being able to walk around without too many lines or groups. I can only imagine what it’s like in the afternoon! The contrast between bright colors and Angkor Wat was pretty incredible. It really popped and made you notice every single detail throughout the entire temple. 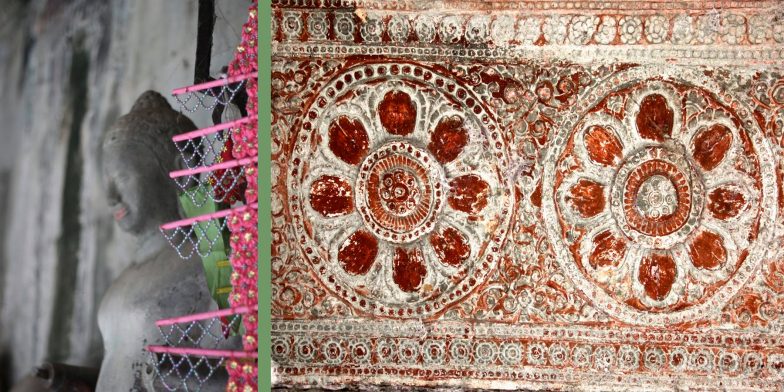 This was also where I started realizing how much of an influence the Khmer Rouge made when they were in control. Some of the temples that stand in ruins and the abundance of headless Buddhas are only a few, and minor, things that they left behind in devastation. 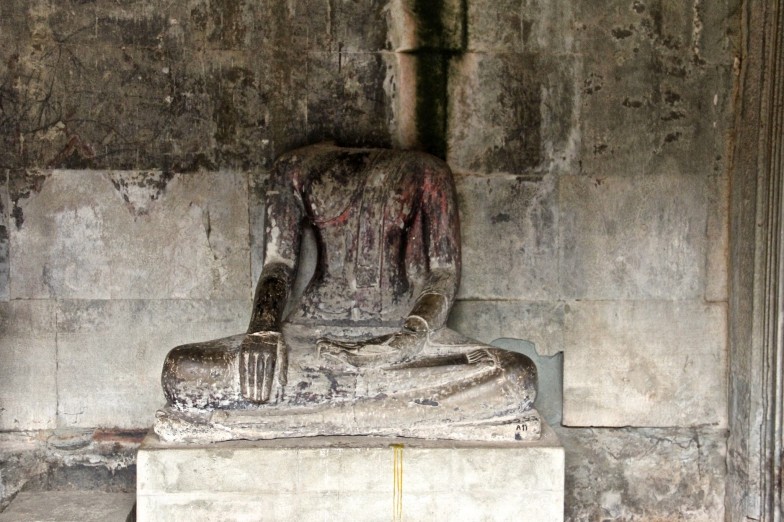 Pictured above: The Hall of a Thousand Buddhas. The heads were taken by the Khmer Rouge and villagers. Then, they were sold on the black market when religion was outlawed.

One of the cool things that we did was visit the “echo chamber.” It looks like a mix between an entryway and a chimney. When you stand up against the wall and thump your chest it vibrates and “thuds” throughout the whole space. Apparently, you’re supposed to do this seven times for good luck. I don’t think we knew that while we were there, but we thought it was pretty cool so I’m sure we reached lucky number seven. 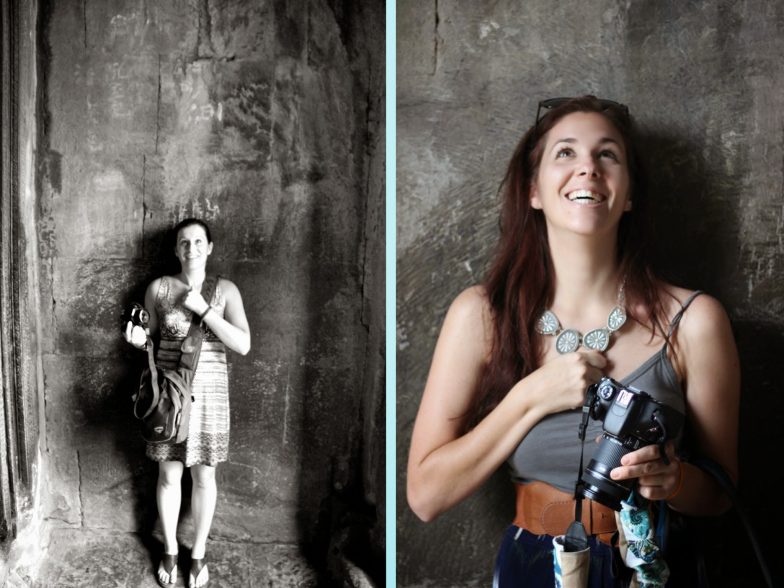 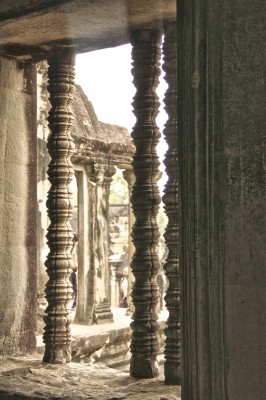 The funniest part was when we first got there: I’m not sure if this is some kind of secret (it’s not so secret since it’s in a book), but the guys ahead of us must have thought we weren’t sure what to do. They grabbed Tab by her shoulders and pushed her up against the wall. Not in a scary way, just an informative way. They showed her what to do and were cracking up the whole time. We knew what to do already so it was a pretty funny interaction.

I quickly became obsessed with these window balusters (pictured at right). They’re so detailed and architecturally amazing!

Yes, my inner architecture obsession came out and I wanted to see more. I’ve researched them a bit and, apparently, they are supposed to look like wood or at least like they were lathe-turned. I suppose the intricate details and the way they are carved could give you the illusion.

Lastly, we visited the galleries of Angkor Wat. According to angkorguide.net, “The outer gallery of the pyramid, including the western corner pavilions, shelters the most precious treasures of Angkor Wat, reliefs in a total length of more than 600 m. They depict narrative scenes from mythology and history.” 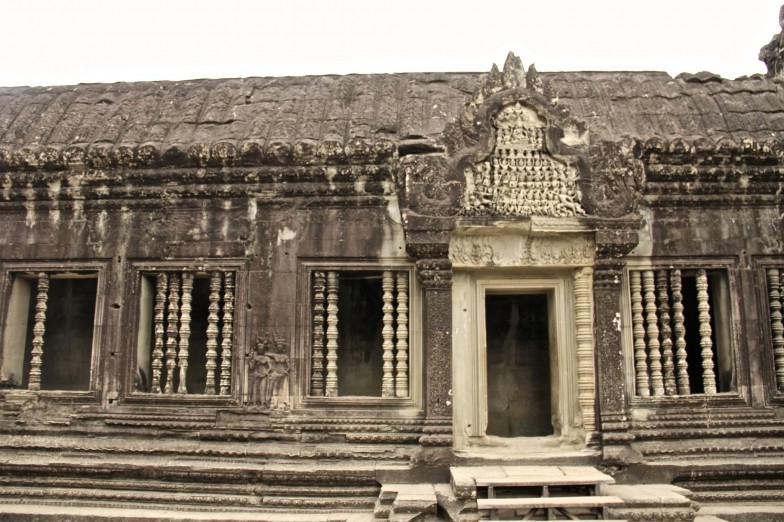 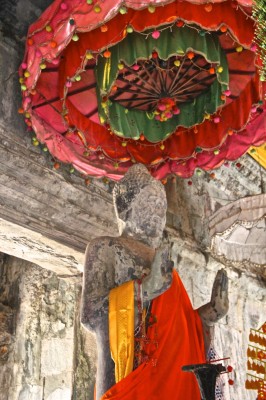 My favorite was the south gallery, Heavens and Hells. It was the only narrative in which the story was so clear to me. You could see the movement in the stone. I know it sounds silly and it was something we joked about while we were there because Tabitha’s book talked about “seeing the fury in the opponent’s brow,” or something like that and it made us giggle. However, at this gallery you could see the people in “heaven” sitting calmly and, basically, being carried. In “hell” there was so much more chaos and nervous activity.

It was incredible to see! We saw all of this before 9:00 a.m.! Our tuk-tuk driver took us to breakfast and onward to our next stop, but I think that Angkor Wat has earned the opportunity for its own post! I’ll be back to talk about Angkor more next week! 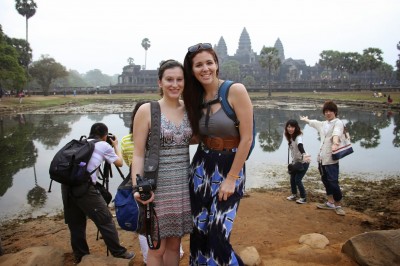