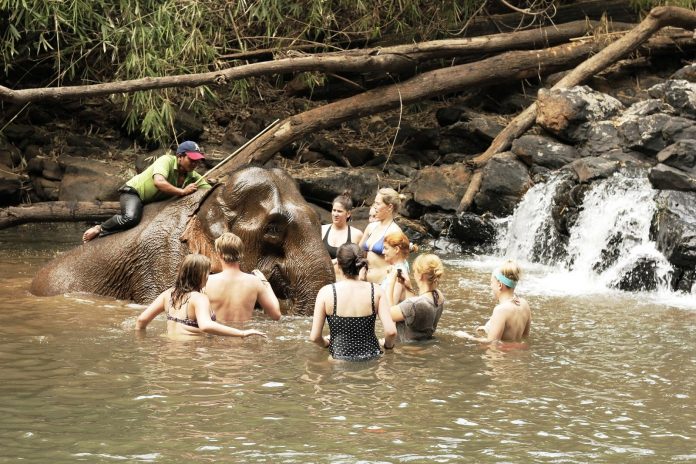 Tabitha and I booked our travel to our next stop, Mondulkiri, through our hotel for around noon. Every time we brought up Mondulkiri everyone would mention that “the road was good.” We figured the road must have been super crappy before since that’s the first thing that came to people’s minds. We got a little dose of what it used to be and Tabitha compared it to constantly going over train tracks. It wasn’t fun. However, about 20 minutes into the ride we hit a HUGE bump and we were, finally, on a very nicely paved road.

We took an Express Ford Van to get there and it took about 5.5 hours. The trips would go a lot faster, but we came to realize that no one ever stops eating in Cambodia. They accommodate that need for food by stopping at least three times along the way, which became a tad annoying. This was also my first experience in a “minibus” and it’s exactly as it seems … mini. For those of you that don’t know, the last thing I am is mini. With that said, my 6-foot-2-inch frame didn’t fit very well. Luckily, the locals were understanding and, usually, gave me the aisle seat so I could sit sideways. Yeah, you read that right, I sat sideways for 5.5 hours. Sounds awesome … said no one ever.

Mondulkiri was appealing for two reasons: (1) It’s in the “Wild East” and we were both looking for a little adventure that was off the beaten path and (2) ELEPHANTS! 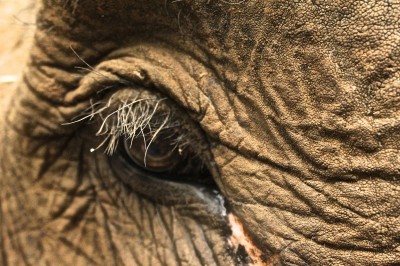 The well-advertised organization is the Elephant Valley Project and we basically set our entire trip around when we could trek with the elephants through said Project. I was pretty stoked because, turns out, I’m obsessed with elephants. I didn’t really know it, but it’s a full blown love affair now. I want one… well, one that doesn’t poop.

After driving for forever, we were literally dropped off on the side of the road at dusk. Our hotel ended up being outside of the town, Sen Monorom, and when we passed the sign someone told him to stop … and so he did. We rolled with it and picked up our bags to walk back toward the hotel with an, “Well, this seems normal, right?” type of attitude. After a small search and rescue mission for Tabitha’s Jawbone Activity Tracker that she had dropped in the tall grass, we were on our way. 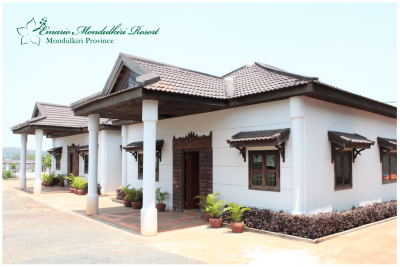 When we got to the hotel we realized that we were, literally, the only people staying there. The name was Emario Mondulkiri Resort and the photos looked amazing online. It was cheap and looked the most “upscale” for the price. When we got there, it reminded us more of storage units than a hotel and Tab had unspoken fears of us getting sold to the sex slave industry. With that said, I don’t think we were ever actually in danger and the rooms were good. It’s just eery to be the only people staying in a hotel that’s in the middle of nowhere and you can’t speak the same language as the people at the front desk.

We went into town on the back of motos (driven by the guys from the front desk) and got some dinner. We found a little guesthouse that had a restaurant in it and by the end of our trip they pretty much knew our life stories. It wasn’t necessarily the food we were hoping for, but it was hot and the beer was cold. This was pretty much the norm in Mondulkiri – everything is there, but nothing is really exceptional. 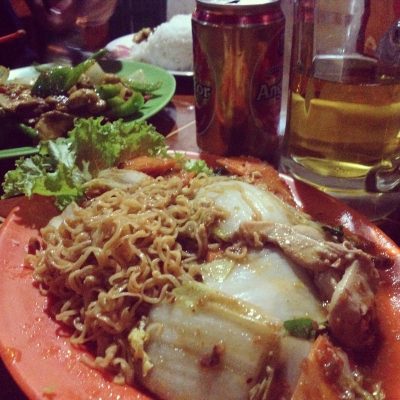 We soon learned that the locals were not happy about the Elephant Valley Project and think that they’re stealing money from the local comminuty. The people in Mondulkiri seem to think that all of the money coming in from tourists should be spent more on the village (how EVP is advertised), but actually goes to “some white man” in Australia. I had read something, briefly, about it before we came but didn’t pay much attention to it otherwise. It wasn’t until my moto driver said, very directly, “They aren’t good people,” that Tabitha and I decided to look into it. 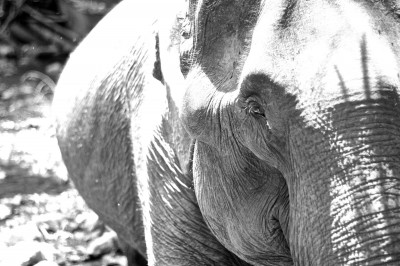 After much discussion and a last minute decision, we ultimately decided to cancel our reservations with the Elephant Valley Project. Actually, we cancelled at 11:30 p.m. and we were set to meet them at 6:00 a.m. the next day. Instead, we went through The Mondulkiri Project. It’s a new elephant sanctuary that launched in November 2013, if I remember correctly, and Mr. Tree is the local guide. I can’t say whether or not the locals view them in the same light as the EVP but, after being with Mr. Tree all day and hearing all of his stories, I think they are doing right by the community.

Mr. Tree picked us up, along with the nine or 10 other trekkers that day. We all piled into his truck, which was half full of supplies for the family that cooks us lunch. It was the tightest fit that I’ve ever witnessed. At one point there were three other people in the back of the truck with us. So adventurous! 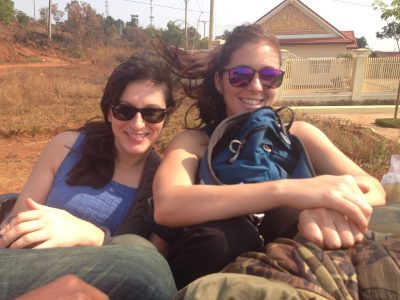 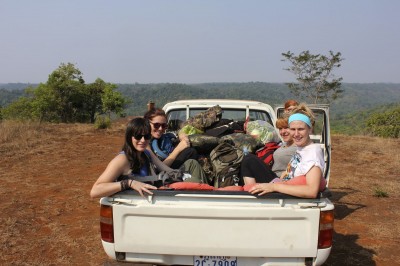 After talking up a storm, Mr. Tree handed us a bunch of bananas and we started down the path. Literally, two steps into the trekking part someone in front of me stepped on a bamboo stick and it did the whole cartoon rake thing and completely stabs me in the foot. I start bleeding everywhere, naturally, and it’s the one day we didn’t bring band-aids. Luckily, the other trekkers weren’t dummies and I was fixed up pretty quickly. It couldn’t have been planned any better: a day meant to be an amazing day walking with elephants rapidly turns into me bleeding everywhere and Tabitha frantic that I’m going to die and there are two giant elephants that were hungry for our bananas right in front of us! 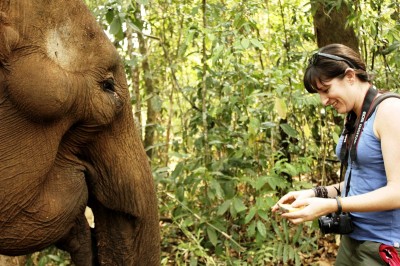 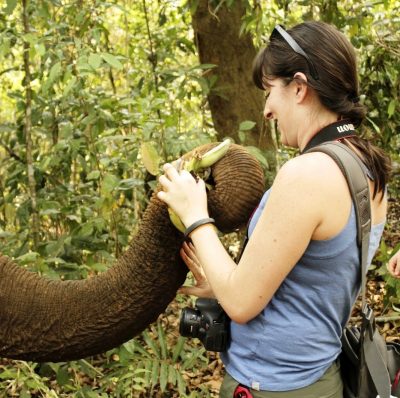 After feeding them and amputating my foot (just kidding!), we followed them through the bamboo forest letting them be elephants. Mr. Tree told us about their fun personalities and how they were sisters. Basically, it was Tabitha and I in elephant form. Haha! Either way, it was really fun following them around and seeing how swiftly they move. They walk with a purpose and take down everything in their way (another resemblance to Tabitha and I, perhaps)! 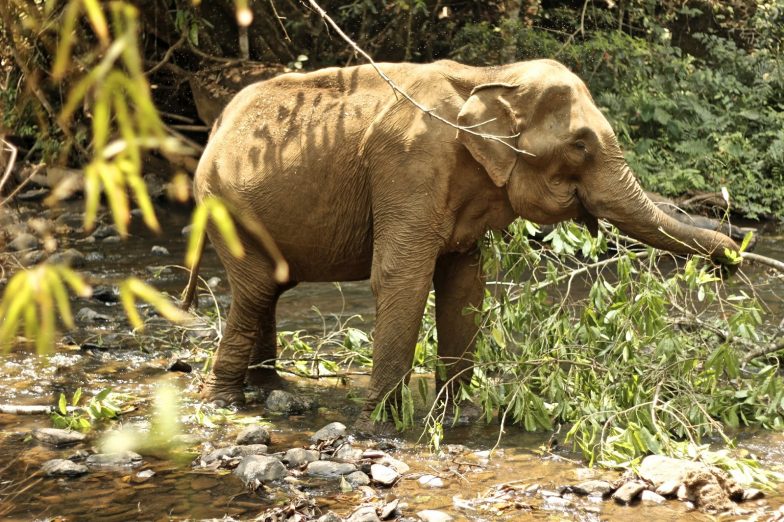 We went back to the little hut that we started at to have lunch and take a nap. It was wonderful and relaxing. They tied up a bunch of military-grade hammocks and we all just zipped ourselves in and snoozed for about an hour. 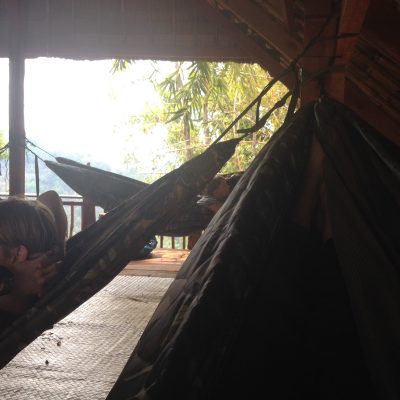 I couldn’t sleep and there was a little boy there making tons of noise and getting fussy. So, I got my iPhone out and let him take pictures of himself. He took about 50 and they all looked like the one below! I think he liked to hear the noise of the camera. 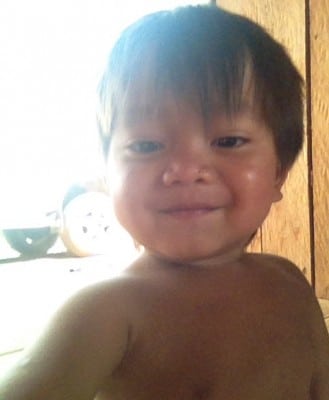 (Sidenote: He was naked as a Jaybird and, at one point, had a t-shirt on that had holes right in the butt cheeks so it looked like he had bottomless chaps on. It. Was. Hilarious.)

Afterwards we re-joined the elephants. At this point Tabitha asked, “Who are we following?!” and I simply answered, “The elephants!” That’s exactly what we did … just let the elephants be elephants. 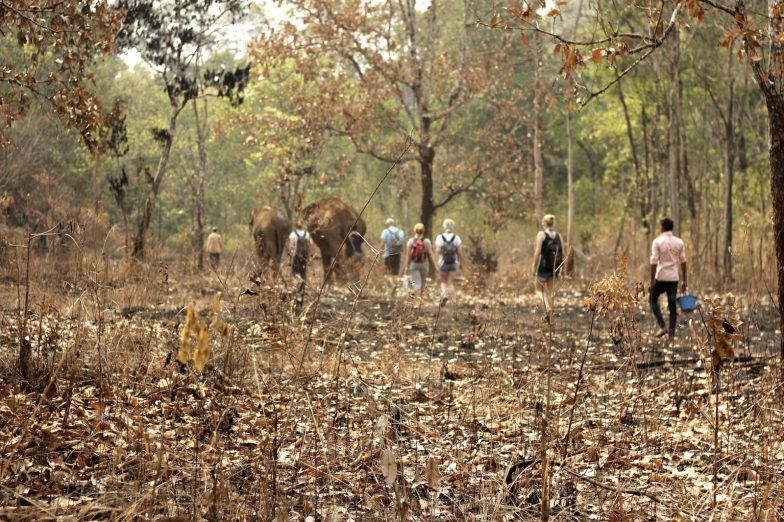 Lastly, we followed them to get baths. Everyone could get in the water, but since I had an open wound on my foot I decided to skip it. Looking back, this is partly to have fun and partly because you’re so filthy that you, too, need a bath. I think it took a solid two-three days before my towel didn’t turn a nice rusty dust color after a shower. It was like it was embedded into my skin. Gross! 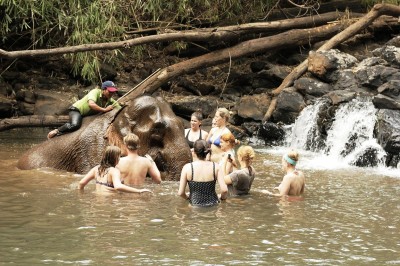 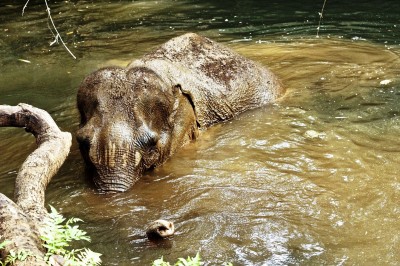 After their baths, the elephants went to their bed (a banana tree garden) and we headed back to Sen Monorom and had dinner. We were only going to get one beer each and then we had all of these cans piled in front of us. Typically, they take them away from the table and it’s not as … ummm … white-trash-feeling to have all the cans sitting around you. We cracked up about it, but we were too tired to really care. 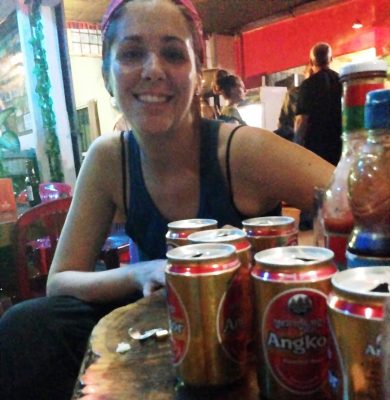 I still can’t believe that we walked around with elephants all day, but by the end of the day we were “so over” Sen Monorom and Mondulkiri. We wanted to go back to our hotels with pools, but tomorrow was another day and another adventure and I can’t wait to tell you about it! 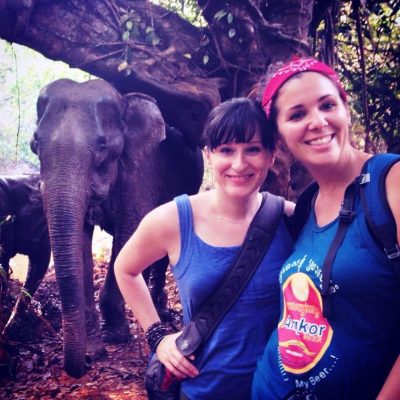 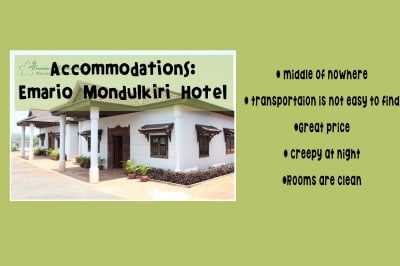