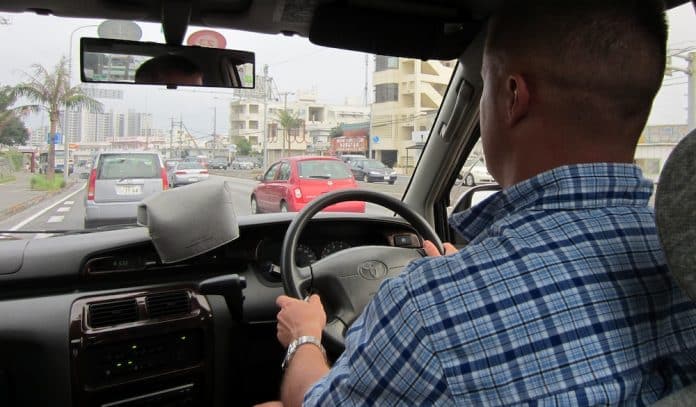 After the shock of our first weekend on the island, the next couple of days were essentially one big cram session: learning the new rules of the road, rules on base, and rules everywhere else. Maybe I’m in the minority, but I thought the driving test was a little tougher than expected. I was thankful I’d spent some quality time studying all the foreign road signs and right-of-way rules. (Kenny had received a driving handbook in the mail just before we left the states.) There were two versions of the test, each with 45 questions total: the first 35 multiple choice, the last ten dedicated to road signs. I was sure there would be a question on the BAC limit, and indeed there was. It came as a surprise to me that the legal limit here is .03, which is only a little more than one drink depending on your size.

Kenny and I took the written driving test four days after we landed here. We both passed! Phew! We picked up our Japanese driver licenses after the Newcomers Orientation the next day. This was a marathon of briefs lasting from 0730 to 1400. A light breakfast of coffee, fruit and muffins was provided. Presenters covered everything from curfews to family member misconduct, from popular beaches to off-limits establishments (i.e. a Red Light district on the island.) The theme resonating throughout each brief was that we are ambassadors of the United States, and must always remember that our actions on and off base are a reflection of America as a whole. It seems simple enough, but I feel it’s a great responsibility. It really made me think: I want to give Okinawan people a reason to embrace us, not to wish us gone. This is why I am serious about recycling, trying to learn the language, and finding new ways to be a good neighbor.

Speaking of neighbors, we could be stuck inside with ours for days at a time in the event of a typhoon. Winds can be up to 200 mph, and there are four warning stages to be implemented from 72 to 12 hours before a typhoon reaches us. Then there are caution and emergency stages where all outside activities are prohibited. We received a detailed booklet explaining when to bring our loose belongings in from outside and what to have in a typhoon emergency kit. There is a long of items ranging from batteries to bottled water. I’ve experienced hurricanes back home along the east coast, so I’m interested to see how a typhoon here compares to some of the storms I remember from summers past.

The rules seemed to go on forever, and I tried to memorize whatever I could. Watch out for poisonous snakes, spiders, plants and sea life. Never carry a knife off base–it’s a felony here. If you are arrested off base, remaining silent can be used against you in a court of law and you do not have the right to have an attorney present during police questioning. I prayed I would never have to remember those last few.

Finally, it was time to put our knowledge of the new road rules to the test. We had checked out a few of the lemon lots on Foster and Kadena, and Okinawa Yard Sales (which I’ve come to LOVE.) Kenny and I made an appointment to see a 1997 Toyota Noah owned by a family of five that was PCSing back to the states. I hadn’t anticipated buying a van, but we thought it would be great to have the extra space for camping and scuba trips. After a short test drive, new licenses in hand, we bought our first island vehicle. The registration, transfer of ownership and insurance processes were quick and painless, and the previous owners made sure to take us to the appropriate offices for each. They became our newest friends, inviting us out to Sushi Zen the next weekend! It’s funny how quickly you make friends when you’re a half a world away from everything you know.

My first time behind the wheel was like being 16 again. Okay, maybe 18…I was a late bloomer when it came to driving (Mom and Dad eventually had to loosen their protective grip.) My point is, the feeling of newfound independence was just the same. Freedom, with a healthy dose of fear. Kenny’s driving was surprisingly…refreshing. He drove slower than he ever had (kind of the way I drive when he’s making fun of the way I drive.) I reminded him to “Stay to the LEFT!” Gently, of course. And sometimes, not so gently. We would get the hang of this, but in the meantime I was learning to take some very deep breaths.