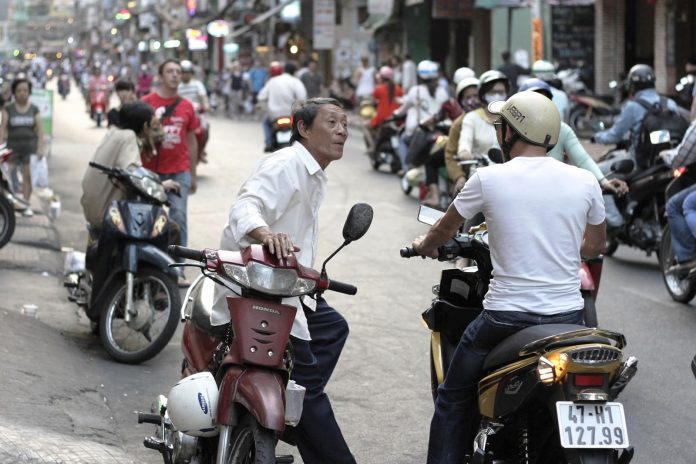 So, what happened the next day was a bit of a shocker … we couldn’t get out of bed. Actually, it wasn’t shocking at all. The bed was like a big cloud that you could wrap up in and never have to leave. It was that good. The room had black out curtains, which definitely didn’t help the situation, so we had to drag ourselves out of bed. We didn’t even leave our room until 12:30 p.m. It was worth it!

When we did finally leave it was because we needed food. Tabitha had looked up all of the great food places in HCMC and we were on a quest to eat at all of them. That’s pretty much all we did while we were in town! The first stop: Quan Thuy 94 Cu. 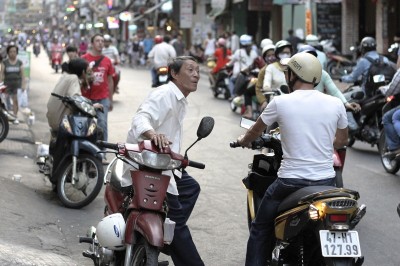 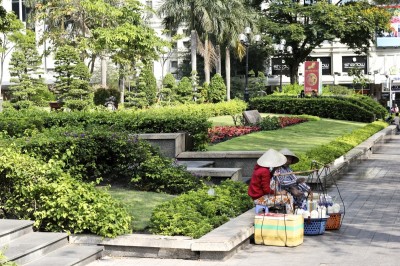 We had some great crab meat spring rolls … like, really great! 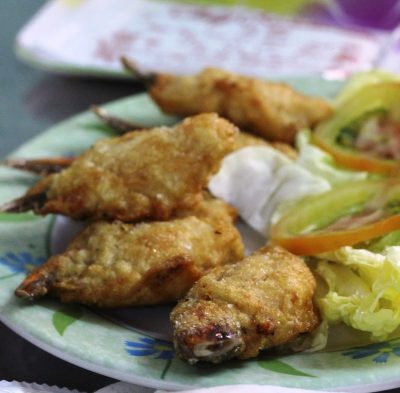 Then, we tried the glass noodles with crab meat. We both agreed that they overused the fish oil for our taste, but the crab meat was really good! The crab claws were to die for and Tabitha enjoyed the soft-shell crabs. Clearly, it was a fantastic meal. It was pricey considering how much everything else in Vietnam costs, but it was worth the search for the ATM. Ha! 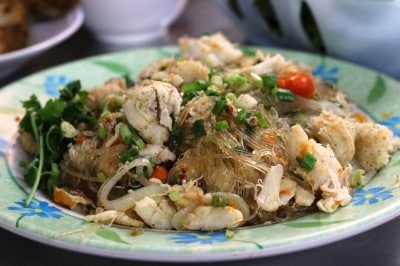 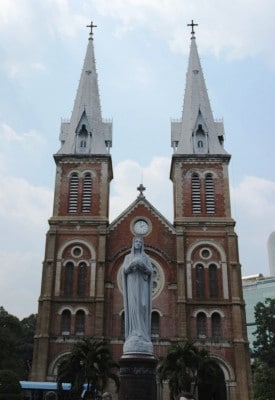 We did some obligatory sightseeing before we could eat again, stopping at the Notre Dame Cathedral and the Saigon Central Post Office.

We did some souvenir shopping, too! We were still searching for some elephant pants, but didn’t have any luck. Instead we found some comfy, cute patterned pants that were similar.

As we walked, we dreamed of finding bia hơi: beer brewed daily that gets delivered fresh every day. We’d read that they just popped up on random street corners and we figured that it would be on the backpackers road, but we didn’t have any luck. Then, I did a Google search and it literally popped up on a map, “Fresh Beer.” We were in business!

We stopped to get bánh mì, a Vietnamese Po Boy sandwich. We were in search of the most popular stand, but along the way we were “fooled” by a different stand that was strategically located right around the corner from the real place. We ended up with two sandwiches – why not compare!

Turns out, the one from the popular place was popular for a reason! It had so much more meat on it and lots more flavor. 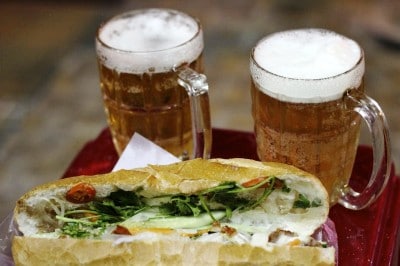 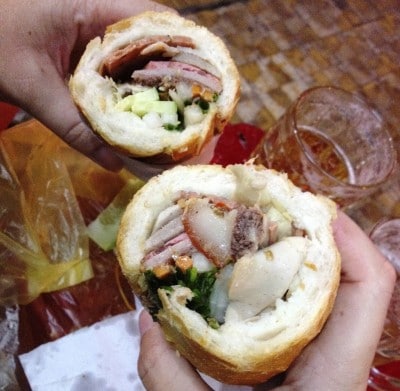 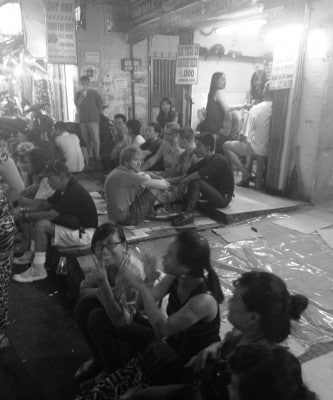 A local ordered some calamari goodness and she offered to let me try it. It was so delicious that I ordered my own.

When we finally found the bia hơi stall, everyone was drinking in tiny kiddie chairs (again) on the sidewalk and it was awesome! We enjoyed our sandwiches and beer in pure Vietnam bliss.

Then, the waitress started yelling, “POLICE! POLICE!” and we were suddenly taken back to our college days! Ha!

Apparently, you can’t have chairs on the sidewalk. So, instead, everyone just sat on the ground that had been covered in plastic and cardboard. It was such a fun environment! Our last night of our Sister Trip had just been wrapped up in a pretty little bow.

The next morning we got up early (6:30 a.m.) to go to Phở Hòa, a great pho spot in Saigon. We were pleased to see we were the only white people there – our sign that it was a true, local restaurant! They had all of the fixings on the table to dress up your soup and it was delicious! I was, however, a little bitter that we didn’t get bananas on our table. Ha! 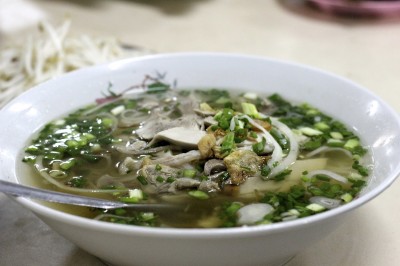 We headed back to the hotel to pack our bags for the last time and get ready to leave. Sad! We still had big plans for the rest of the day, but we wanted to get this part out of the way because check out was, technically, at noon. After we were ready to go, we dropped our bags at the front desk and headed out on our last foodie adventure: The Lunch Lady! 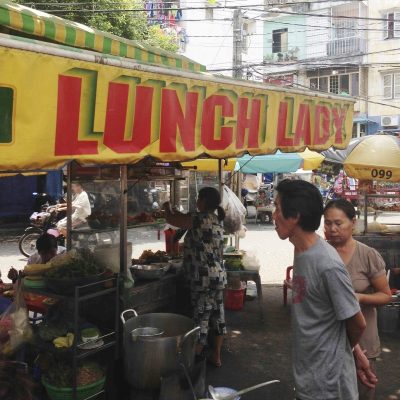 Around 10:30 a.m. we headed out to find The Lunch Lady, a woman who makes fresh soup every day and was featured on Anthony Bourdain’s “No Reservations.” When we found her stall we were so giddy!

The soup came with three-four different types of meat in it and I can’t even express how flavorful it was. It was just spicy enough to make me happy, but had the right amount of noodles to help even it all out. 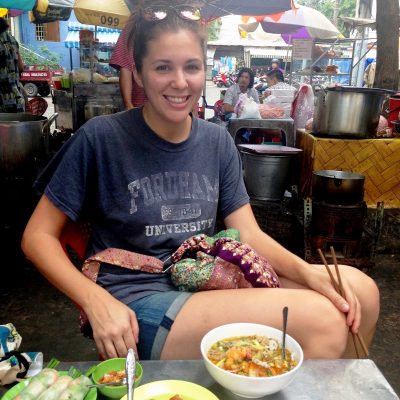 It was so unique and it didn’t compare to anything that we’d had during out entire trip. To add the cherry on top, we got a photo with the actual Lunch Lady! 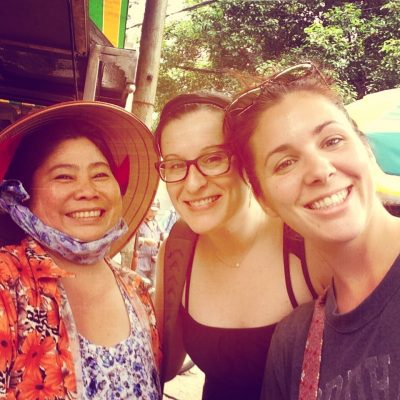 We spent our last few hours at the pool having some cocktails and charging our electronic devices. It was a great trip and I look forward to the next one! Cheers to the best Sister Trip EVER! 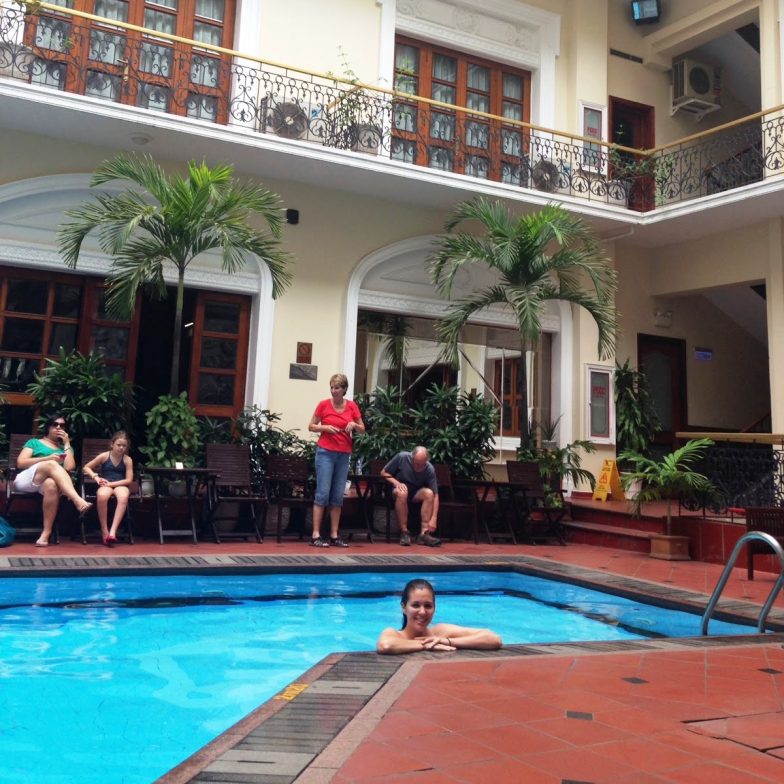